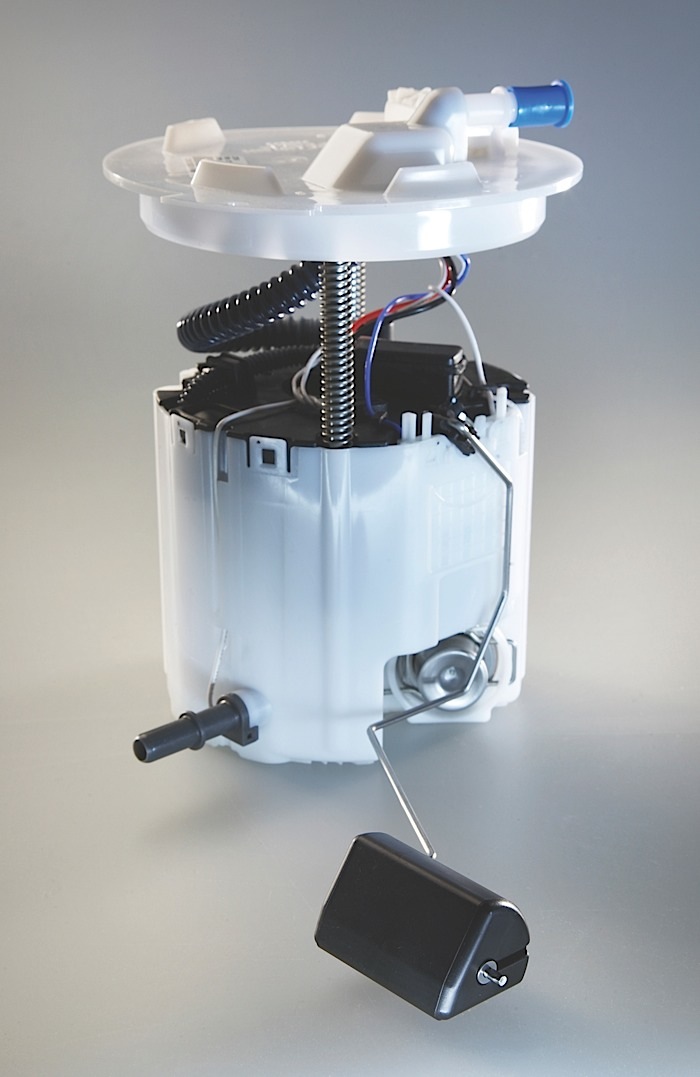 Why have the vehicle manufacturers gone to this type of setup? To reduce evaporative (EVAP) emissions from the fuel system. In 2004, federal emission regulations required lower EVAP emissions. This, in turn, required a change to returnless fuel injection systems on many vehicles.

On a conventional port fuel injection system, fuel is routed to a fuel rail on the engine to supply the injectors. Fuel pressure is controlled by a vacuum-operated mechanical regulator mounted on the fuel rail. Intake vacuum is routed to the regulator through a vacuum hose and pulls against a spring-loaded diaphragm to maintain a preset pressure differential in the fuel system. When intake manifold vacuum is high, excess fuel pressure is vented through the regulator bypass valve and routed back to the fuel tank via a fuel return line. Unfortunately, this carries a lot of engine heat back to the fuel tank and increases evaporative fuel vapor emissions.

Returnless systems are now used on many late-model cars and trucks. The first ones appeared back in 1993 on certain Chrysler V6 and V8 truck engines. By 1998, all Chrysler cars and light trucks had them. In 1996, Toyota introduced its first returnless system, and Honda went returnless in 2001. General Motors and Ford started down the returnless route in 1999, and in 2004, GM went returnless on most of its full-size pickup trucks and SUVs with the Vortec 6000 (LQ4 and LQ9) engines, including the Cadillac Escalade; Chevy Silverado, Suburban and Tahoe; the GMC Sierra and Yukon; and Hummer H2.

Actually, there are two different types of returnless EFI systems in use: mechanical and electronic. In the mechanical systems, a mechanical regulator is mounted on the fuel pump module to provide a more or less constant fuel pressure to the engine. This type of setup works well with speed-density EFI systems that use throttle position, intake manifold pressure and engine rpm to determine engine load rather than an airflow sensor.

On 1996 Chrysler and Dodge minivans with returnless EFI systems, the regulator can be serviced by removing the fuel pump module from the fuel tank, then prying back the locking tabs that hold the regulator in its housing. The regulator can then be pried out and replaced with a new one. There are also two O-rings inside the housing that also should be replaced. Forget these, and the system may not hold normal pressure.

Electronic returnless EFI systems also may be referred to as “On Demand” returnless EFI systems because they use a fuel tank pressure sensor to monitor fuel pressure. The PCM varies the speed of the fuel pump to increase or decrease fuel flow using pulse width modulation (PWM) of the pump’s supply voltage. The PCM determines how much fuel is required based on engine load and inputs from its other sensors. This type of system is typically used on an engine that has an airflow sensor to monitor engine load. 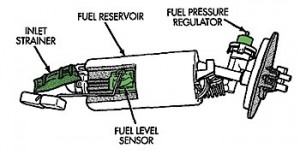 The system has a number of different operating modes:

• Starting Mode: When the ignition is first turned on, the PCM energizes the fuel pump relay for two seconds. This allows the fuel pump to build pressure in the fuel system. The PCM calculates the air/fuel ratio based on inputs from the engine coolant temperature (ECT), mass air flow (MAF), manifold absolute pressure (MAP) and throttle position (TPS) sensors. The system stays in starting mode until the engine speed reaches a predetermined rpm.

• Clear Flood Mode: If the engine floods, the engine can be cleared by pressing the accelerator pedal down to the floor and then cranking the engine. When the throttle position sensor is at wide open throttle, the PCM reduces the fuel injector pulse width in order to increase the air/fuel ratio. The PCM maintains this injector rate as long as the throttle stays wide open and engine speed is below a predetermined rpm. If the throttle is not held wide open, the PCM returns to the normal starting mode.

• Run Mode: This includes Open Loop and Closed Loop. When a cold engine is first started and is idling, the system begins Open Loop operation. The PCM ignores the signal from the oxygen sensors and calculates the air/fuel ratio based on inputs from the ECT, MAF, MAP and TPS sensors. The system stays in Open Loop fuel control until both front oxygen sensors are hot and producing a varying voltage signal, engine coolant temperature is above a specified temperature, and a certain amount of time has elapsed after starting the engine.

• Acceleration Mode: When the driver pushes on the accelerator pedal, the engine sucks in a lot of air. To keep the engine from hesitating, the PCM increases the pulse width to the injectors to provide extra fuel enrichment.

• Deceleration Mode: When the driver releases the accelerator pedal, air flow into the engine is reduced. The PCM monitors the corresponding changes in the TPS, MAP and MAF sensors. The PCM shuts off fuel completely when decelerating rapidly, and when the vehicle is coasting down with the throttle closed. This saves fuel and prevents damage to the catalytic converters.

• Fuel Cutoff Mode: The PCM cuts off fuel from the fuel injectors when the following conditions are met in order to protect the powertrain from damage and improve driveability: It does this when the ignition is off (prevents engine run-on when the engine is hot); when the ignition is on but there is no ignition reference signal (prevents flooding or backfiring); when the engine speed is too high (rev limiter); when the vehicle speed is too high (speed limiter); and during an extended, high-speed, closed-throttle coast down (reduces decel emissions and increases engine braking).

Returnless EFI systems are subject to the same problems as any other type of fuel injection system: pump and relay problems, plugged fuel filters, dirty injectors, even bad gas. Consequently, diagnosis is similar.

Returnless EFI systems typically operate at a higher pressure than return-type systems. This is necessary to reduce the risk of fuel boiling and vapor lock in the injector supply rail during hot weather (since there is no recirculation of fuel from the engine back to the tank to keep the fuel supply rail cool). Because of this, returnless EFI systems may not perform well if fuel pressure or flow is less than specifications.

On returnless systems that use pulse width modulation to vary the speed of the fuel pump, you should be able to read the value of the control signal on your scan tool. Look for a change in the number when engine speed/load changes. No change would tell you there’s a problem with the fuel pressure sensor, or possibly the fuel pump driver circuit in the PCM.

Fuel volume should also be measured if you suspect a weak pump is starving the engine for fuel at higher speeds and loads. A weak pump can often generate enough pressure at idle to meet specifications, but runs short when the demand for fuel goes up. As a rule, a “good” pump will deliver at least 750 ml (3/4 quart) of fuel in 30 seconds.

Low fuel pressure and/or flow can also be caused by a plugged filter, by restrictions in the fuel line, or low voltage to the pump itself. The filters on most returnless EFI systems are “lifetime” filters with no scheduled replacement interval. Under normal conditions, most should last upwards of 100,000 miles, but they won’t last that long if the vehicle has rust or dirt in the gas tank. Replacing the filter requires dropping the tank, removing the module and, in most cases, replacing the entire fuel pump module because the filter cannot be replaced separately. Imagine telling your customer he needs a new fuel filter and it will cost $600 to change it! 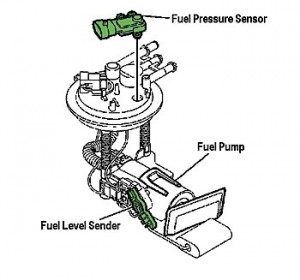 If an in-tank filter has become clogged, or the fuel pump has quit, be sure to inspect the inside of the fuel tank after you pull out the fuel pump module. Dirt and sediment can be removed by steam cleaning the tank. But if a metal tank is rusty, replace the tank to prevent a repeat failure of the new pump module. n