Herman Campbell has worked on cars his entire life. During that time, he has rebuilt about 300 engines for Model T Fords. He recently received the Model T Ford Club of America’s highest honor, the Walter Rosenthal Award. Campbell, who is 89, still spends his days working on Model T’s.

Below is the article as it appeared on The Oklahoman website. 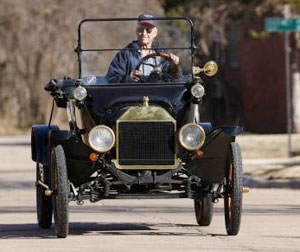 “I’ve been around this machinery all my life,” he says, pointing to lathes, boring machines and other heavy equipment in Herman’s Salt Mine, as he calls his backyard refuge. That he’s 89 and has been retired for 27 years doesn’t slow him a lick.

What keeps him grinding away with machinery older than him is the same thing that grabbed his eye as a high schoolboy in Carnegie — the Model T Ford. Particularly, Model T’s that need lots of attention, which is pretty much all of them.

Campbell has spent a lifetime building and rebuilding the vehicles, including about 300 engines for Henry Ford’s flagship “people’s car.” Now others who also revere that icon of the industrial age have recognized Campbell for his contribution to keeping the assembly line standards going and going.

The Model T Ford Club of America gave Campbell its highest honor, the Walter Rosenthal Award, named for the club’s first president, who died tragically but perhaps fittingly while driving a Model T. Representatives of the national club presented the award Tuesday to Campbell at a meeting of the Oklahoma Model T Club. A video of the presentation will be played next month at the national club’s annual meeting on a cruise ship off California’s coast.

To read the entire article and view additional photos, visit The Oklahoman website at http://newsok.com/car-club-praises-fan-of-model-t/article/3543234.