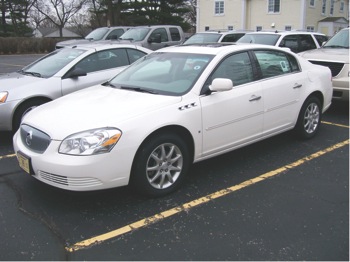 Each part of our series on Advanced Misfire and Fuel Trim Analysis documents the use of fuel trims and oxygen sensor behavior to determine if the misfire activity is ignition, engine mechanical or fuel related. Part 1 of our series focused on ignition-related misfires. Here, we’ll focus on fuel-related misfires.

We will address this from the viewpoint of moments in time to offer a deeper understanding of these concepts. As I ­mentioned in the last article, the first step is to ­visualize these failures from the beginning. Picture that a fuel-related misfire has occurred on a subject vehicle. Through our initial diagnostics, we find that it is a single cylinder misfire, and prior to failure, the pre-oxygen is switching and working as ­designed. The post-oxygen sensor is also working as designed and almost appears as a straight line when looked at per graphical data or a lab scope.

This time we’ll use a 2008 Buick Lucerne as an ­example. The figures from our scan tool will be used to show the activity.

Figure 1 denotes how the pre- and post-oxygen sensors may look on a subject vehicle prior to any type of misfire-related activity.

Note that at the very point of failure, the short-term fuel trim (STFT) will increase and, depending on design and strategy of the system, will show ­impressive numbers for short term. After the processor has acknowledged this, the resources of long-term fuel trim (LTFT) will work to get the short-term numbers back as close as possible to at or near zero. The end ­result is that after corrective action has taken place by the processor, there will be a significant impact on the total fuel trim adaptives (ST + LT). This analysis is based on a subject vehicle that has good fuel trim ­values to start with. A range of +/- 5% is optimal on many systems today, but a range of +/- 10% may be acceptable.

A great example is a vehicle that has a total correction of 15% prior to fault; you will have higher numbers once fuel-related misfire activity occurs. I have found that many vehicles with fuel-related misfire ­activity viewed after corrective action has taken place per the processor will normally show numbers that can add to double digits. This difference is noted in reference to ignition misfires that show numbers that may add to single digits.

Now, let’s further our education by taking a look at our case study, using a 1998 Pontiac Bonneville with ­multiple misfire activity. 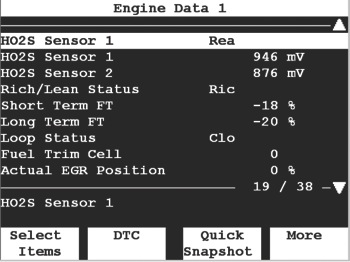 Upon review of this failure, it shows that a STFT of -18% was noted and a LTFT of -20%, this is a total correction of -38%. See Figure 3. This is a significant impact on the total fuel trim correction (ST + LT). The misfire activity appears to be on cylinders 1, 2 and 3. See Figure 4. Based on service records, we found that a fuel pressure regulator was replaced prior to our analysis. 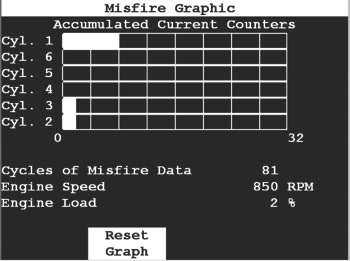 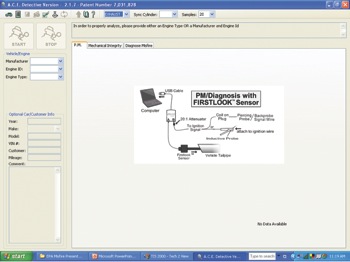 We have found a resource online with misfire software; go to www.acemisfire.com for more ­information on it. We decided to try this software along with the FirstLook Engine Diagnostic Pulse ­Sensor. See Figures 5-7. 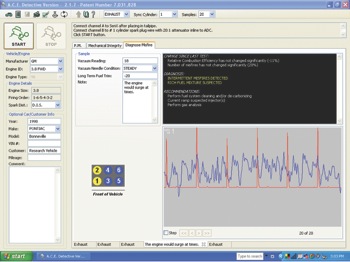 According to online sources, by mapping the pulse waves generated by the engine, FirstLook (used along with your lab scope) can be used to quickly spot failures in the engine system. Also, by using a trigger, you can spot these failures to specific cylinders. On those cars with accessible fuel pressure regulators, FirstLook allows you to see the pressure drop in the fuel rail caused by the injectors as they fire. 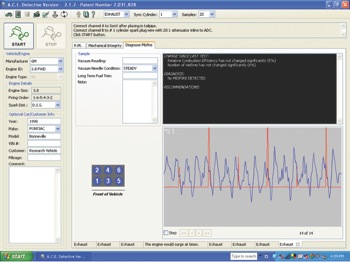 We found it to be very helpful in drawing a conclusion to repair.

After the oil was changed on our Bonneville, the fuel trims returned to their normal operating parameters.