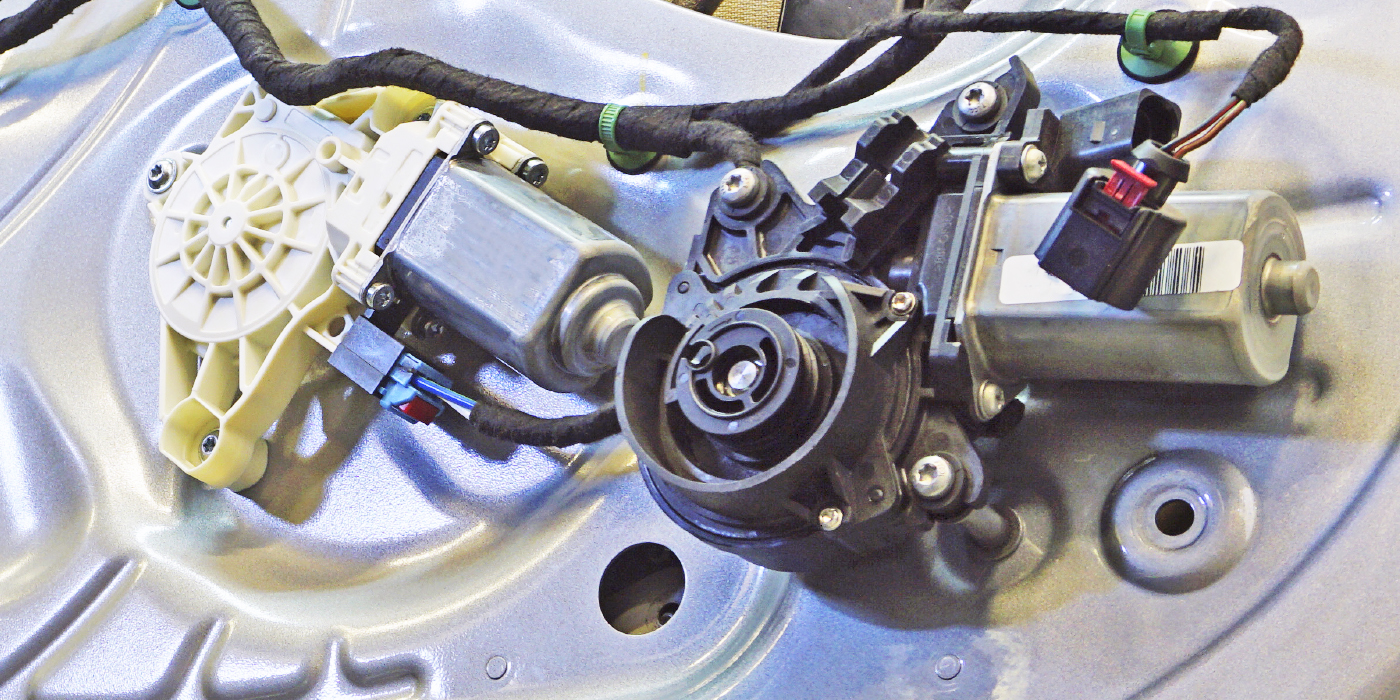 Blindly replacing a window regulator and motor assembly may not solve a customer’s problem.

Window regulator and motor replacements are easy. But, diagnosing the system can be difficult on late-model vehicles. So, before you order the parts and pull the door panel, there are new technologies and diagnostic strategies you need to understand.

First, the switch for the window is not directly connected to the window. The switch is just an input to a computer module that actuates the window.

Second, all modern power window systems since the 2011 model year have automatic reversal or anti-pinch technology. Many manufacturers implemented this technology as far back as 2003. This technology uses hall effect and/or current sensors to measure the movement and force of the window. This feature prevents an occupant from being injured by a closing window.

Third, a power window system can be connected to the security and other systems on the vehicle. This connectivity allows the customer to control the windows with a keyless entry remote. Mazda and Ford call this a “Global Close” feature. For this to occur, three modules on the vehicle have to communicate to open or close all the windows when the vehicle owner holds the lock or unlock button on the remote for five seconds.

With these new layers of complexity come new diagnostic strategies and installation procedures. Blindly replacing a window regulator and motor assembly may not solve a customer’s problem.

But, it is not all doom and gloom. These new technologies make it easier to confirm the cause of a failed window regulator without having to remove the door panel. Here are some techniques you can use to diagnose a window regulator and/or motor assembly before removing the door panel. Many of these methods are from domestic and import automakers, but they can be applied to most vehicles with power windows.

The first step is to record the vehicle owner’s complaint. Merely stating the window is not working is not enough detail. Many late-model window problems can be intermittent or could involve the anti-pinch and auto-reversal mechanisms. These notes are critical for the technician to duplicate the problem. Once the issue can be reproduced, inspect for obvious faults like physical damage or a blown fuse.

Before you pull off the door panel, you can confirm the operation of the module, switches and motor with a scan tool. Looking at the live data stream, you can see if a switch press was registered with  the power widow control or body control module.This is a recommended procedure in the service information from many automakers for diagnosing a window problem.

With a scan tool, you can actuate the window using bi-directional commands with the scan tool to confirm the operation of the motor. Another trick when dealing with an intermittent operation complaint is to look at the other modules connected to the power window control module or body control module. If these modules fail to communicate, the other modules will generate codes that have lost communication with the window module.

If you have still not confirmed the problem, there is one more check you can perform before you remove the door panel. If you can access the wiring harness in the door jamb, you can check the voltage and current going to the motor.

Using a wiring diagram, you can find the power wires to the motor and measure current drawn by the motor with an amp clamp connected to a multimeter or scope. BMW released a TSB on this diagnostic tactic where they said the initial current spike when the button is pressed should be around 19-20 amps. This method can also help to spot damaged tracks and bound up cables and linkages.

If you need to confirm there is power going to the motor, you can backprobe the connectors at the door jamb. If a connector is not in a convenient area, you can measure voltage when the button is actuated with a piercing probe. Just make sure you repair the insulation on the wire with electrical tape or other products.

By using these diagnostic strategies, you can determine and confirm what parts have failed and what was the cause of the failure. When you replace the window regulator, pay special attention to the tracks, clips and linkages. Any extra resistance can cause another failure and possibly cause the anti-pinch system to activate. Excessive dirt in the track and channels needs to be removed and then lubricated with a dry-film lubricant.

Some vehicles require the window switch to be held for three to five seconds in the fully up or down positions. Others may require a scan tool to reset or “normalize” the system.

If the recommended procedure does not work, you might need to check for codes in the modules for the power window system.  Another item holding up the process might be the battery. A weak battery can be discharged during the repair process. This could cause a condition in which the system voltage drops below a level of 7-10 volts when the switch is pressed. When the voltage drops, modules can shut down or can’t communicate. If this is the case, charge the battery and try again.