An out-of-control Ford Ranger crashed into the lobby of Minnick’s Auto Repair and Towing in Winchester, VA, on Wednesday. No one was injured, but damage to the shop was significant. A sign on the window of the shop’s service bay instructed customers to “give a shout into the open wall” for service.

Below is the article as it appeared on the Northern Virginia Daily website. 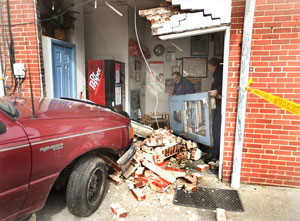 WINCHESTER — A city man was charged with reckless driving Wednesday after crashing a red Ford Ranger into the lobby of a local auto repair shop, city police said.

No one was injured when Brandon E. Henry, 19, of Shawnee Drive, lost control of the truck at about noon and plowed into Minnick’s Auto Repair and Towing, at 32 W. Cecil St., said Winchester police Sgt. Frank Myrtle.

Myrtle said Henry was traveling south on Braddock Street and turned left on Cecil Street before he struck the business at its office entrance.

A damage estimate was unavailable, but the impact to the busy shop was significant.

To read this article on the Northern Virginia Daily website, visit http://www.nvdaily.com/news/2011/02/car-crashes-into-auto-repair-shop.php.