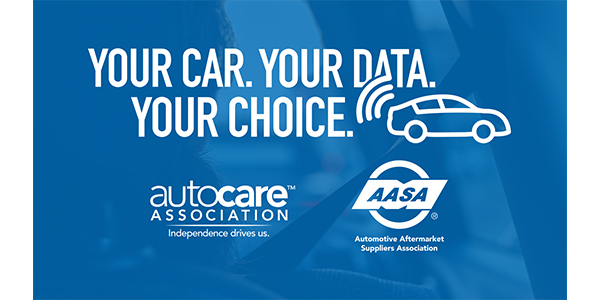 A petition created by the national education and advocacy campaign Your Car. Your Data. Your Choice. reached 15,000 petition signatures on Friday, Nov. 22, marking a significant milestone in the effort to ensure drivers have direct access to and control of their car data.

A petition created by the national education and advocacy campaign Your Car. Your Data. Your Choice. reached 15,000 petition signatures on Friday, Nov. 22, marking a significant milestone in the effort to ensure drivers have direct access to and control of their car data.

Newer model cars today are equipped with advanced technologies that enable real-time, wireless transmission of data related to driver behavior, GPS location and car health, including maintenance and repair information. Without control of and direct access to the diagnostic and repair information wirelessly transmitted from cars, consumers could face greater inconvenience, increased costs and fewer options for repair and maintenance services for their car.

“Support for a driver’s right to choose who controls their car data is reaching a fever pitch,” said Bill Hanvey, president and CEO of the Auto Care Association. “We will continue to amplify the diverse voices of our stakeholders and place pressure on lawmakers to do what they know is right: give consumers control of their car data.”

Securing 15,000 petition signatures is the latest milestone for the Your Car. Your Data. campaign. In April, it brought together automotive, security and privacy experts, policymakers and consumer advocates for an engaging panel discussion on how the connected car impacts consumer choice. The following month, Hanvey authored an op-ed published in The New York Times that helped draw attention to the significant issues surrounding data collection and ownership in modern cars. And recently during AAPEX 2019, the campaign facilitated its second panel discussion this year, focused on cybersecurity and the connected car. These combined efforts have helped build steady momentum and increase awareness of the car data access and control issue among consumers, industry employees and policymakers.

“It’s great to see the campaign has engaged so many people,” said Paul McCarthy, president and COO of the Automotive Aftermarket Suppliers Association. “Access to car data is vital not only for consumers, but also for the continued existence of an industry that supports 4.6 million jobs and generates $392 billion in economic revenue.”

Your Car. Your Data. has secured the support and engagement of several vocal and high-profile National Hot Rod Association (NHRA) professionals, including Clay Millican, Blake Alexander, Erica Enders and Megan Meyer, who have helped raise awareness of this issue among their fans. Millican and Alexander recently met with policymakers in Washington, D.C. to discuss the issue and its potential impact on the nation’s drivers.

“I was shocked and upset when I first learned about this issue,” Millican said. “The alarm bell is ringing, and we need to fix this before it’s too late. To me, it’s simple: if it’s my car, it should be my data.”

Advertisement
In this article:Auto Care Association, Your Car. Your Data. Your Choice.

Petition Calling On Congress To Guarantee Consumers Access And Control Over Data Generated By Their Own Cars Reaches 15,000 Signatures