It appears that bay traffic bounced back in July, but all the recent news about the economy and federal budget deficit has set a pessimistic tone concerning the outlook for service work.

Once again, I’ve reached out to Nick Mitchell, senior vice president of research at Northcoast Research, an independent, full-service institutional equity research and trading firm headquartered in Cleveland, OH, for insights from its monthly research study. 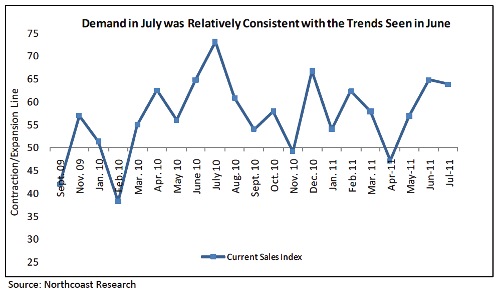 The latest report through July shows that business has been pretty good during May, June and July after hitting the lowest point of the year in April. According to Mitchell, “the repair shops in our sample experienced a year-over-year increase in sales that was relatively consistent with the trends witnessed in June.”

The difference between June and July, though, is the value of the average repair order helped June, while it was bay traffic that helped July.

According to one shop owner, “More cars made it into my bays this July, but people were much more apprehensive about spending money, which caused my average repair order to be less than the prior year’s.”

Warmer weather this July also helped drive traffic, with some shops reporting an increase in air conditioning and radiator work.

Unfortunately, consumers are continuing to decide against having maintenance work done on their cars and trucks. Another data point tracked by Northcoast Research is the deferral rate of maintenance. Back in April, the increase in gas prices really started to drive this deferral score in an unfavorable direction.

May and June continued the trend, and now the July data shows that more than 35% of survey respondents indicated an uptick in the number of consumers putting off preventive maintenance. We won’t see high maintenance numbers like we saw in March of this year until overall economic conditions improve and gas prices subside.

As mentioned above, the recent debate about the debt ceiling, the government’s credit rating and reaction of the stock market are taking a toll on shop owners’ optimism score. Northcoast Research measures optimism in the market with its Three-Month Outlook Index, which hit a low point for 2011 back in April, but experienced a rebound in both May and June. While the majority of respondents are optimistic about business conditions, the July number contracted from the May/June levels.

Month-to-month business fluctuations are nothing new for shop owners. The good news for aftermarket service shops is that there are 180 million vehicles on the road that are more than five years old. If consumers don’t believe in proper maintenance today, your shop will be ready to help them when the vehicle finally breaks down, which may be sooner rather than later because of their deferred maintenance habits.