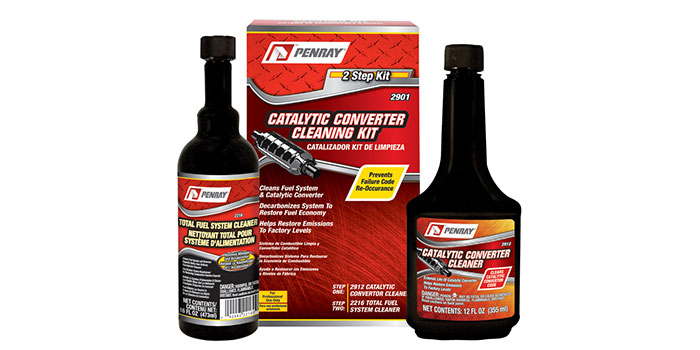 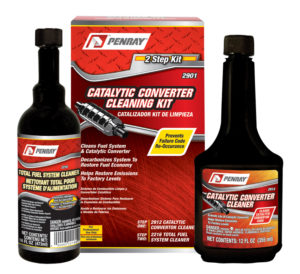 Penray Inc. has announced immediate availability of its new Catalytic Converter Cleaning Kit No. 2901 for gasoline-powered cars and light-duty trucks. Penray says this is the first product of its kind available in the automotive aftermarket, and the only such product to receive EPA approval.

This new two-step chemical cleaning kit removes contaminants from the catalytic converter, restoring its ability to reduce harmful hydrocarbon emissions and eliminating the need for costly replacement. A key benefit is reducing emissions by as much as 50 percent, according to Penray, which can enable vehicles to pass emission tests, and preventing fault code recurrence. The kit also includes Penray’s Total Fuel System Cleaner No. 2216, which removes deposits from fuel injectors and other critical fuel system components. This provides improved performance and fuel economy while helping to prevent future contamination within the catalytic converter.

Penray’s chemists have developed exclusive blends that can remove these contaminants, exposing more of the catalyst to the exhaust stream and resulting in a reduction of hydrocarbon emissions by as much as 50 percent, according to the company. Penray’s two-step process then cleanses contaminants from the fuel delivery system, preventing future contamination of the converter’s precious metals. In doing so, it helps prevent recurrence of the Check Engine light.

“Our chemists have created an ingenious blend that is able to remove carbon buildup from within catalytic converters, restoring their ability to reduce harmful emissions,” explains Mark Kardon, director of marketing for Penray. “Until now, the primary solution for contaminated or malfunctioning catalytic converters has been replacement, which is very expensive, costing upward of $1,500.

“However, now there is an affordable solution in the form of our new Catalytic Converter Cleaning Kit No. 2901, which restores converters to their original performance level. And the inclusion of our Total Fuel System Cleaner No. 2216 assures that the converter will remain contaminant-free for many thousands of miles.”