Guy Morrison, who operates Gold Street Muffler and Automotive Repair in Ironton, OH, decided to show his support for the Cincinnati Bengals by transforming a Volkswagen into the ultimate fan car.

Below is the article as it appeared on the Ironton Tribune website. 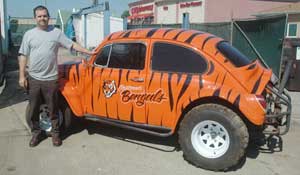 Morrison — who operates Gold Street Muffler and Automotive Repair in Ironton — took his love of the Bengals an extra yard or two as he an a friend modified a Volkswagen bug into a Bengals’ fan car.

“We pulled it out of a building and got carried away with it,” said Morrison.

The car was orange but they gave it another coat of paint. Morrison’s friend Darren Allen painted a Bengals’ tiger head and the “Cincinnati Bengals” name on the doors. They took vinyl and cut out tiger stripes and taped them to the car.

“We worked on it for about a month in our spare time,” said Morrison.

To read the entire article on the Ironton Tribune website, visit http://www.irontontribune.com/2011/10/06/bengals-bug-bengals%E2%80%99-fans-build-ultimate-team-car/.