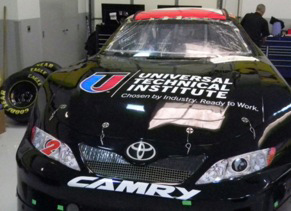 In total, three teams and eight cars in each K&N race will house an NTI-built and maintained engine, giving NTI students the opportunity to see their hard work and dedication play out right before their eyes on the race track.

"Our relationships with Rev Racing, HRE and X-Team showcase the talent of our students," said John Dodson, community and NASCAR team relations director. "After a successful 2011 NASCAR K&N Pro Series East season, where our engines went to victory lane in seven out of 12 races, we’re looking forward to seeing how the engines perform this year."

Only the most highly qualified NTI students are tapped to work on the engines, and must maintain a 3.8 GPA to be considered. The ability to maintain an active race team’s engine is highly sought after by NTI’s ambitious student base, given the doors it can open to potential employment after graduation.