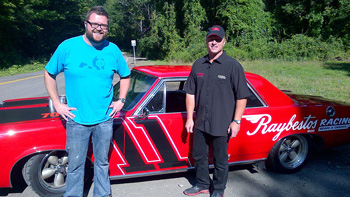 As a fun kickoff to the Watkins Glen race weekend, a few select NASCAR team customers and media personalities were invited by the manufacturers of Raybestos Brakes to test drive the company’s new 2011 promotional giveaway vehicle:  a highly-customized 1964 Pontiac GTO built for road racing, powered by a 700 horsepower GM LSX 454 V8 engine, and equipped with Raybestos NASCAR-spec brakes.  Drivers were given the keys to the “race-ready but street-legal” vintage muscle car, strapped into the harness, and invited to pilot the GTO-R around the original 6.6 mile street circuit of the early 1950s Watkins Glen Grand Prix races.

“This thing’s awesome.  You can tell they lightened it up a lot.  Horsepower is awesome, transmission is smooth, brakes are obviously Raybestos, so they stop right on a dime…Nice car, very well built,” said Tommy Baldwin, Owner and Crew Chief of the No. 36 Tommy Baldwin Racing Chevrolet Impala.

“When you have a lot of power, you have to be able to stop – and that’s not always on everybody’s mind when they build a car,” said Rutledge Wood, NASCAR RaceDay analyst on SPEED TV and host of History Channel’s Top Gear USA.  “You all started with that, and went the other way – so it’s crazy to be able to get in there and push it, and have all that… It’s awesome.  I’m going to be smiling for weeks.  That was so insane… I’m so impressed by it!”

A comprehensive feature article on the Raybestos ’64 GTO-R appears in the upcoming October 2011 issue of Hot Rod Magazine, which is scheduled to hit newsstands in mid-August.

The lessons learned on tracks at places like Watkins Glen are continually translated into product improvements across the entire Raybestos product line, which include racing, street performance, police patrol/pursuit vehicles and heavy-duty trucks.