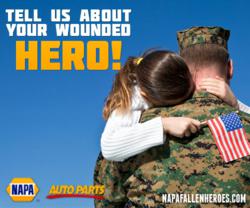 NAPA AUTO PARTS and the Intrepid Fallen Heroes Fund will send a few very special service men and women to the big NASCAR race in Chicago this September. This experience includes pit passes, a unique, behind-the-scenes look at NASCAR, the chance to meet Martin Truex Jr., and VIP accommodations.

To be considered, members of the community are asked to nominate heroes who have been wounded in the line of duty to be honorary members of Martin Truex Jr.’s race day pit crew. Tell why your special military friend or family member wants to be a part of the NASCAR experience, and he or she could be on their way to the big NASCAR race in Chicago. Just fill out the form found at http://www.napafallenheroes.com by August 15.

As honorary pit crew members on September 16, 2012, winners will get to meet Truex, tour the pit area and track, and have a hands-on look at the pit crew in action. Winners will also receive an official pit crew shirt, have their names displayed on the NAPA #56 Toyota Camry, and receive VIP accommodations to the big NASCAR race.

"We greatly appreciate the support of NAPA AUTO PARTS and Michael Waltrip Racing to honor our American heroes in uniform," said David Winters, president of the Intrepid Fallen Heroes Fund. "NASCAR is uniquely American and we’re proud to collaborate in this unique opportunity."

Tim Scanlan, general manager of the NAPA Chicago Distribution Center, said “It is NAPA’s honor and privilege to align ourselves with the Intrepid Fallen Heroes Fund to commemorate our great nation and those who fight for our freedom. After all the sacrifices they’ve made in service to our country, this unique NASCAR experience is NAPA’s way of saying ‘thank you.’”

About the Intrepid Fallen Heroes Fund:
The Intrepid Fallen Heroes Fund, a national leader in supporting the men and women of the United States Armed Forces and their families, has provided over $120 million in support for the families of military personnel lost in service to our nation, and for severely wounded military personnel and veterans. The Fund most recently opened the National Intrepid Center of Excellence to support the research, diagnosis, and treatment of military personnel and veterans suffering from traumatic brain injury (TBI). The Fund is now launching a new project to build satellite TBI centers at several major military deployment bases around the country, providing more direct care to our wounded heroes in uniform. For more information about the Intrepid Fallen Heroes Fund, visit http://www.fallenheroesfund.org.