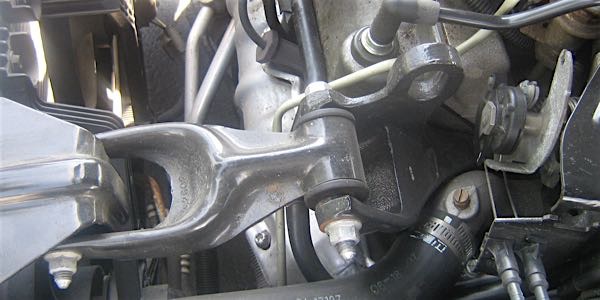 Back in the old days, spotting a failed motor mount was easy. The cooling fan hit the radiator shroud and the engine would move side-to-side as the engine was loaded. Today, it takes a little more time to spot a worn motor mount. Why? Because a modern motor mount might do more than just hold the engine in place. 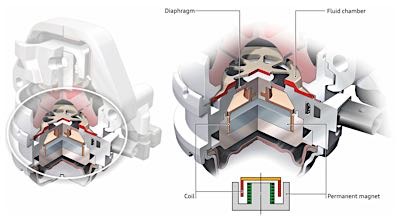 Back in the old days, spotting a failed motor mount was easy. The cooling fan hit the radiator shroud and the engine would move side-to-side as the engine was loaded. Today, it takes a little more time to spot a worn motor mount. Why? Because a modern motor mount might do more than just hold the engine in place.

Motor mounts are not a very glamorous product, but they do have an important function: They support the engine and transmission and dampen noise and vibration. The mounts isolate the engine and transmission from the chassis so vibrations and noise are not transmitted to the rest of the vehicle. On some front-wheel-drive cars, upper mounts (torque struts) also control the fore and aft movements of the engine during acceleration.

Most motor mounts are relatively simple in design and consist only of metal attachment plates and large rubber insulator blocks. But, some vehicles have “hydraulic” or “hydro-mounts” with hollow chambers filled with glycol or hydraulic fluid.

Hydro-mounts act like a jelly-filled donut to absorb vibrations that would otherwise be transmitted to the chassis. Hydro-mounts are often used with four-cylinder and V6 engines that don’t idle as smoothly as V8s or luxury vehicles where motorists expect less noise and vibration. Some hydro-mounts even have internal valving and/or a solenoid to change the dampening characteristics at different RPMs to better tune out unwanted vibrations. These are called “switchable” hydraulic mounts or “electronic” mounts. 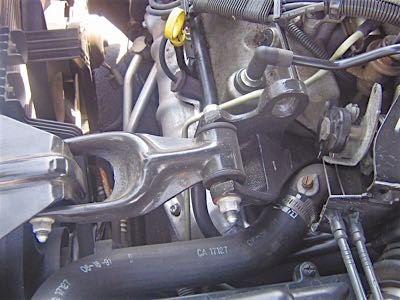 When a motor or transmission mount fails, one of several things can happen. If the rubber separates or delaminates from the steel, the mount can break. The design of the mount usually prevents the engine from falling out of the car, but it can’t keep the engine from twisting or rocking when the vehicle accelerates or is under load.

This can produce thumping and rattling noises, as well as overstressed components such as radiator and heater hoses, wiring connectors and the exhaust system. In rear-wheel-drive applications that have an engine-driven fan, a broken mount may allow the fan to hit the radiator or shroud. Drive belts or pulleys may also be forced to rub against other components if clearances are tight.

A broken or loose motor mount in a front-wheel-drive application can be even more serious because it may allow engine movements that interfere with the throttle or shift linkage. But, this is less of a concern on vehicles with throttle by wire. Excessive fore and aft rocking of a transverse-mounted engine also can lead to exhaust leaks where the head pipe joins the manifold or causes the head pipe itself to fail. If the broken mount is an end mount, it may also contribute to a torque steer condition and cause accelerated wear or separation of the inner CV joints on one or both halfshafts.

The motor mounts are seldom checked unless there is an obvious problem, and they may even be overlooked if the engine or transmission is being replaced. You should remind customers to check their motor mounts if the engines seem noisier than usual or they can feel engine vibrations inside their vehicles. The condition of the mounts should also be inspected when any major engine or transmission work is done, or when replacing a clutch, halfshafts or a driveshaft. 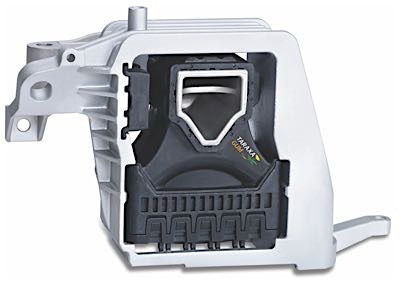 Mounts can be visually inspected for cracked, loose or broken brackets; loose or missing bolts; collapsed rubber or fluid leaks (hydro-mounts). A pry bar can be used to check for separated or broken mounts.

Another way to check the mounts is to put the transmission into drive and lightly load the engine while keeping the other foot on the brake. Excessive engine movement may indicate loose or broken mounts that need to be replaced.

Replacement mounts may or may not have the same construction as the original. Fluid-filled hydro-mounts are expensive, so a more affordable alternative may be a solid replacement mount. But, a solid mount obviously can’t provide the same level of dampening as the original hydro-mount. Consequently, the vehicle owner may not be happy with the way his car feels if a less-expensive solid mount is substituted for a fluid-filled mount. 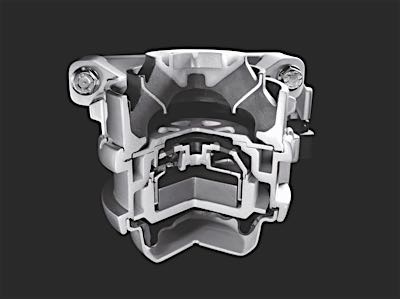 The first active motor mounts used a vacuum to change the stiffness of the mount. Most of these systems use a solenoid to control the amount of vacuum applied to the mount(s). The solenoid is typically controlled by the ECM/PCM. Typically, the less vacuum that is applied to the mount, the stiffer it gets. The most common problems on these mounts are vacuum leaks caused by a separated motor mount. In some cases, the vehicle may have a lean code set due to the leak.

The next generation of mount controls the valving of the mount with an electric motor. Most systems can operate using direct voltage to control the motor. Some use a pulse-width-modulated signal that can adjust the mount quickly to cancel out vibrations. The electrical side of these mounts hardly ever fails. What fails is the rubber holding the fluid in the mount.

Porsche has started using active motor mounts with magnetorheological fluid. The system uses magnetized iron particles in a synthetic oil. An electromagnetic coil changes the viscosity of the fluid to control the movement of the motor mount. The mount can be civilized at idle and become extremely stiff when the driver pushes the engine to the limit.

Advertisement
In this article:Motor Mount