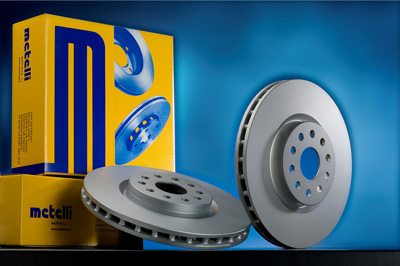 Metelli’s brake parts range was completed last year with the introduction to the world market of brake shoes and coated brake discs (DSP) at Automechanika 2010 in Frankfurt. The DSP brake discs use a specially developed paint on the brake disc that prevents oxidation on the areas of the disc not in contact with the pad.

Metelli’s brake parts are subjected to rigorous testing, meeting and exceeding regulations, and in compliance with the tightest geometric tolerances and best surface finishes, in order to guarantee the progressive braking that makes for a comfortable, consistent and safe drive. This level of testing also ensures the proper adjustment of the disc on the pad, and pad on the disc.

Beginning with highest quality raw materials—Metelli uses X-rays and a variety of tests on its raw materials—and moving through the production process, each step includes redundant testing and extra care to guarantee quality. Cast-iron brake discs, for instance, are subjected to no fewer than 12 finishing operations. Aluminum pistons, which function in tandem with the master cylinder, are surface-treated with a hard anodization process. Random testing and rigorous postproduction testing, including pressure testing, add to the redundancy that gives Metelli its superior ranking among aftermarket suppliers.

According to Metelli, it is committed to furthering its research and development in the European car-parts market, which includes BMW, Mercedes, Audi-Volkswagen, Volvo, Porsche, Land Rover and Saab. Its internal research laboratory continues to offer innovations that result in new product development, updated designs and parts; all these elements enable Metelli S.p.A. to remain highly competitive in not only the U.S. aftermarket but the world aftermarket. The development of the DSP coated rotor or brake disc is one such innovation that has advanced the science of brake manufacture.

Metelli was founded in 1962 as a mechanical factory by Luigi Metelli. Beginning in 1970 the company began to manufacture car components, and today its range consists of more than 10,000 catalogue items, covering most of the European car PARC and including light commercial vehicles. Metelli exports to 90 countries. The components are used for cars from Europe, Asia and the U.S., manufactured for the independent aftermarket, original equipment suppliers (OES) and original equipment manufacturers (OEM).