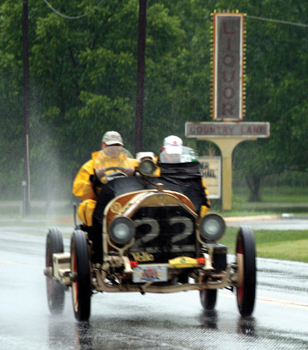 The 2012 Great Race will be off and running in a few months. The race, an event that caters to classic and vintage vehicle enthusiasts of all ages, takes place June 23 through July 1, 2012, (see map for cities along the route). However, the exact route is kept a secret until the actual start of the race to make it fair for all entrants. As a owner of a shop that specializes in servicing classic and antique vehicles, I get asked a lot of questions about the race and how it works, so here are the answers to the most burning questions.

Q: What is the Great Race?
A: The Great Race is an antique, vintage and collector car competitive controlled-speed endurance road rally on public highways. It is not a test of top speed. It is a test of a driver/navigator team’s ability to follow precise course instructions and the car’s (and team’s) ability to endure on a cross-country trip. The course instructions require the competing teams to drive at or below the posted speed limits at all times.

Q: How does the Great Race work?
A: Each day the driver and navigator team receives a set of course instructions that indicate every turn, speed change, stop and start that the team must make throughout the day (usually 220 to 250 such instructions per day). Along the course route there will be from four to seven checkpoints recording the exact time that the team passes that point. The locations of the checkpoints are unknown to the entrants, but occur at the most inopportune places.

The objective is to arrive at each checkpoint on time — not early and not late. The score for each team is the result of the team’s ability to follow the designated course instructions precisely. Every second off the perfect time (early or late) at each checkpoint is a penalty point. 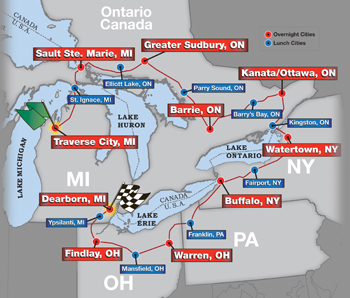 This format is much more mentally demanding than a flat-out cross-country race. Also, GPS, computers and cell phones are not permitted and odometers are taped over. This is a test of human mental agility and endurance as well as classic car endurance, rather than programming capability.

The course avoids timed segments on interstate highways, opting instead for scenic local, county and state highways whenever possible through some of the prettiest country in the United States.

Q: Is there an age limit for the cars that can enter the race?
A: Any car up through model year 1969 is eligible to enter. For purposes of scoring, the older the vehicle, the better the age factor adjustment the team will receive. Newer vehicles are permitted in Regional Rallies. But for the Great Race, the vehicle must be 1969 or older.

Q: What route is the 2012 Great Race taking?
The map here will show the cities the Great Race will pass through. The exact route will not be disclosed until the actual start of the race each day.

At each Great Race stop mid-morning (30 minutes) and noon (two hours max) and evenings (two to three hours) the cars will be on display. You can walk up and talk to the drivers and navigators and look over their cars. If they are at a lunch stop, their time may be limited, as they need to eat go to the bathroom and get prepared for the afternoon portion of the race.

The late afternoon/early evenings are an excellent time to go see the cars. They start arriving around 5 p.m. and are on display for a couple of hours each evening. You’re welcome to look the cars over, ask the drivers and navigator questions, take pictures and get autographs signed.

Later on the cars will go to the motel parking lot where the teams will do their maintenance on the cars and prepare for the next day. You can go visit them there as well, you just need to stay out of their way as they work. If you get too close, they might ask you to hold a flashlight or hand them a wrench.

Q: How much does it cost to enter the Great Race?
A: Corporate Entry: $5,000 per car. A Corporate Entry is defined as a for-profit business that requires signage on the competing vehicle and/or stands to gain from publicity resulting from participating in the Great Race. Corporate Entries receive priority in the start position.

Tire Calibration
All of the cars entered in the Great Race are required to run tires correct to their era. Since radial tires were not invented in 1922, a 1922 car along with those entered that were built before the 1960s, are required to run natural rubber tires. 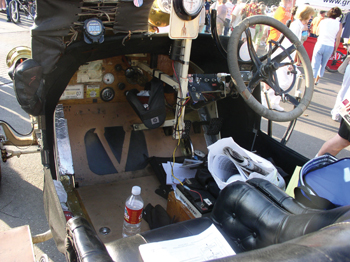 This correction, which is the difference between your speed and time score and the established perfect time score (figured as a percentage) is what Great Race entrants will figure into all of the course instructions they receive each day. Known as a correction factor, the number will be different for every car…and for every tire, so if entrants have to change a tire, they’ll also have to refigure their correction factor. 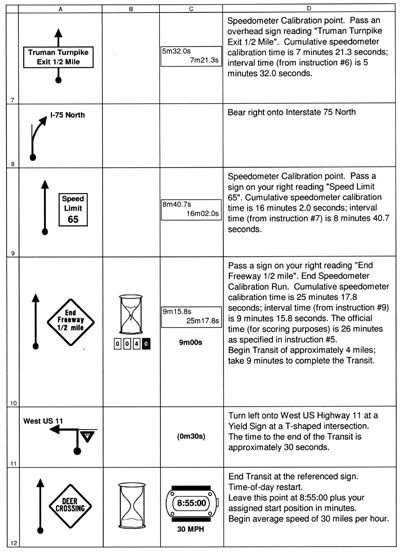 Scoring and Timing
Times are in hours, minutes and seconds. Official time is Coordinated Universal Time (UTC) referenced to radio station WWV of the National Institute of Standards and Technology or CHU of the National Research Council of Canada. WWV time is available by radio or by telephone: 303-499-7111.

Time Zones: The time of the time zone at the start of each stage is used for scoring throughout that stage, regardless of time zone changes. Entrants have to remember to reset their time before the next stage start if the time zone changes. Time zone information is given in an Event Supplement and in the Course Instructions. Times recorded at Timed Checkpoints are resolved to the nearest second.

Scoring: Each team will receive a penalty score based on each second their leg time differs from the perfect time computed for that leg. A vehicle that misses (fails to pass) a checkpoint or passes a checkpoint not under its own power will receive the penalty stipulated in V.E.2.

A vehicle that arrives at any checkpoint more than 30 minutes after the computed perfect time from the Stage Start or restart, including the final Observation Checkpoint of the Stage at the Finish Line, will be scored as having missed the checkpoint, and will receive the penalty stipulated in V.E.2.

It is recommended that The Great Racers always be aware of at least the next two instructions so that they won’t pass an execution point while trying to read the next instruction. If they don’t know their next instruction, it’s suggested that they stop, read and understand it before proceeding.

If all of this seems more than a little complicated…it is! Imagine 40+ pages of instructions that you receive just 45 minutes before you leave each day. By the way, it’s up to each Great Race entrant to make sure all of the pages are there before they leave the starting line each day. Great Race entrants have their hands full. Each team does things a little differently, and between the navigator and the driver, they establish who is going to do what and who is responsible for what job.

The navigator is typically responsible for reading and understanding the course instructions, figuring the speed and time corrections and giving directions to the driver. The navigation is the most difficult in my opinion. You have to have a natural sense of direction and an internal working compass so you know in your mind where you are at all times. It just makes the job easier.

Yet More Complications
When the Great Racers come to a corner in the course instructions it gets even more complicated. Because not every car can slow down at the same rate (mechanical brakes vs. hydraulic brakes) and cannot accelerate at the same rate, they have to work through this problem as well.

The course instructions don’t figure any time for slowing down, turning and accelerating. So the team has to keep track of the time spent, starting from the last speed change, slowing down, turning the corner, then accelerating to the new correct speed as shown in the course instructions after having figured in the time correction for the time spent slowing timing and accelerating. It’s not how fast that they do it…it’s how consistent they do it. It has to be the same rate of deceleration and acceleration every time so the correction factor is accurate.

Now suppose the driver is watching his exact speed, the navigator is figuring the corrections from the last corner and they both see the next sign out of the corner of their eye as they go driving by at 40 miles per hour! Now they have to turn around, keep track of the time they were off course, get back on course and refigure the speed correction.

Usually when that happens they will often encounter a checkpoint somewhere within the next mile or so. If it seems like this might have been a trap on purpose to separate the better from the best, it likely was. Also, the Great Racers might encounter two or three speed changes in a mile, end up running a maze through a downtown square, or driving back on the same road they just drove in on…only at a different speed. Anything is possible in the Great Race!

The age of the navigators will surprise you! There has been one as young as seven years old who has navigated for his grandfather and been very successful, winning the Great Race. There have been father/daughter teams, father/son teams; all-female teams — just about every combination — and they have all been successful. Go experience for yourself what it is like to be a part of the Great Race. It will be time well spent.

Randy Rundle is the owner of Fifth Avenue Antique Auto Parts, Clay Center, KS, and services antique and classic vehicles for a living. He has prepared vehicles for movie studios, The Great Race, the 10,000-mile “Peking to Paris Motor Car Challenge” and other similar events.
Rundle, an author of six automotive technical books, has spent 20-plus years solving electrical, cooling and fuel-related problems on all types of antique and classic vehicles.
Visit www.fifthaveinternetgarage.com.