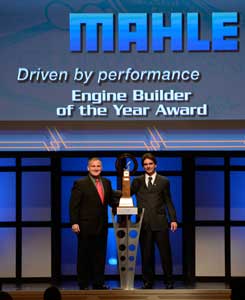 MAHLE Clevite Inc. recently announced the 2012 MAHLE Engine Builders of the Year for the NASCAR Sprint Cup Series, Nationwide Series and Camping World Truck Series. The Engine Builder of the Year award is presented to the top engine builder in each of the NASCAR series who has accumulated the most MAHLE Clevite points based on qualifying, laps led and finishing position.

Shane Parsnow of Hendrick Motorsports was awarded the 2012 MAHLE Engine Builder of the Year title for the Sprint Cup Series based on the performance of the No. 48 Chevy Impala driven by Jimmie Johnson. This year’s award brings the coveted prize back to Hendrick Motorsports since fellow engine builder, Earl Wheeler was awarded the prize in 2010. Parsnow accumulated a total of 378 MAHLE Clevite points.

Mark Cronquist, engine builder for Joe Gibbs Racing (JGR), was also back on top, earning his 6th MAHLE Engine Builder of the Year title in the Nationwide Series – this time for his work on the No. 18 Toyota Camry – earning a total of 429 MAHLE Clevite Points.

“The MAHLE Clevite Engine Builder of the Year is a great accomplishment, and I’m proud to bring it back to JGR this year,” said Cronquist. “Many thanks to MAHLE Clevite for consistently providing unprecedented technical support and high performance racing products that continue to out-perform every year.”

Not only did Hendrick Motorsports receive the prize for NASCAR Sprint Cup Series, Bruce Stauffer was awarded the MAHLE Engine Builder of the Year title for the NASCAR Camping World Truck Series.

For more information about MAHLE Clevite and its brands, visit www.mahle-aftermarket.com, or contact your local representative.