There are few endurance tests more grueling than the Rolex 24 Hours of Daytona. Few racers and teams have been able to complete the test on top after around-the-clock punishment that not only the cars must survive, but also the crews, who have to be on top of their game. 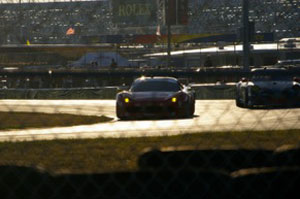 German oil and additive manufacturer LIQUI MOLY was lucky in 1980 when it sponsored the winning Porsche. And for this year’s 50th running of the event, held Jan. 28-29, LIQUI MOLY was all set to give it another try as primary sponsor of the Mitchum Motorsports Porsche entry with drivers Franz Engstler, David Murry, Jade Buford and Gunter Schaldach.

“It would be a wonderful thing to repeat the victory of 1980,” said Peter Baumann, LIQUI MOLY’s head of marketing. “We really want to show our true colors in the USA.”

LIQUI MOLY has specialized in the U.S and Canadian markets for German import vehicles requiring high-performance oils. The company produces its products exclusively in Germany in order to satisfy the quality standards of European manufacturers such as Mercedes-Benz, BMW, Porsche and others. LIQUI MOLY also recently became the top seller in Germany, overtaking Castrol, which had been a longtime market leader.

And if sponsoring a team at Daytona wasn’t enough, LIQUI MOLY also used the weekend’s festivities to entertain 100 guests and customers from around the globe with “red-carpet” treatment, conduct a little training and also offer networking opportunities, as everyone took in the spectacle of 24 hours of racing at the famed track.

While the LIQUI MOLY Porsche GT3 qualified a respectable 33rd for the race, the car developed a vibration in the middle of the night and retired after 416 laps in the early-morning hours of Sunday, finishing 47th. It was a difficult way to end the race and a disappointment for the drivers and team.

Yet LIQUI MOLY reached many of its goals even without winning the race. Company representatives commented that it was their biggest marketing event in North America to date, which they said is all due to the success they’ve achieved in the market.

“Regardless of the result, such extreme races are always a good test for our products,” Baumann said. “And drivers on the road profit from these experiences on the race track.”