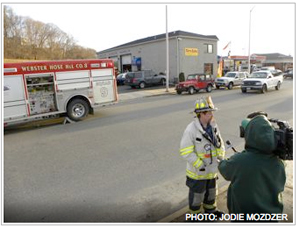 A vehicle owner noticed a green substance on his car near the gas tank and had it towed to Auto Repairs Unlimited in Ansonia, CT, for inspection. When technicians disconnected to fuel line to investigate, white smoke along with a strong odor filled the shop. The shop owner said vandals sometimes put sugar or turpentine into gas tanks, but this is the first time he has ever experienced this type of reaction.

Below is the article as it appeared on the Valley Independent Sentinel website.

What Was In That Gas Tank?

A suspicious substance poured into the gas tank of a Derby resident’s car was likely an act of targeted vandalism, police said Wednesday.

Derby Police Lt. Salvatore Frosceno said the department is investigating what was in the tank and who might have put it there.

The car owner noticed a green substance on the side of the car near the gas tank early Tuesday and called police, according to Frosceno.

The victim, who was not identified, had the car towed to Auto Repairs Unlimited in Ansonia for evaluation.

When mechanics there disconnected the fuel line to investigate the vandalism, a white smoke appeared and a strong odor filled the air, according to Frank Pelaccia, the owner of Auto Repairs Unlimited.

Knowing there was vandalism involved, the workers evacuated the shop and called police, Pelaccia said.

“It filled the whole shop up with smoke,” Pelaccia said. “That’s why we got a little nervous. We didn’t know if it was an explosive or what to think.”

To read the entire article on the Valley Independent Sentinel website, visit http://valley.newhavenindependent.org/index.php/archives/entry/what_was_in_that_gas_tank.