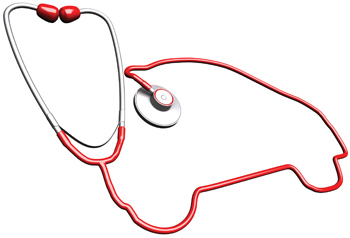 One of my good friends, who is also a really super diagnostic tech, is in the midst of dealing with a diagnostic problem of his very own. He was recently diagnosed with cancer. Not a problem any one of us would like to deal with.

Bo is a really thoughtful, caring and quite intelligent guy, who, for the most part, has seen his share of life’s ups and downs.

Throughout it all, automotive repair and his family have always been a part of the mix. It just seems ­unfair for such a good-hearted guy to have to deal with all these medical issues. But, being the good-hearted guy that he is, he takes it all in stride. He’s actually doing extremely well, and recently completed the last round of the chemotherapy and medications. There’s a 99.9% chance that they caught it in time, which I’m happy to say, shows on his face every time I see him.

Bo’s really sharp on O-scope diagnostics and understands the patterns as if he were born to read them. I lean on his expertise occasionally, and hope some of his knowledge will rub off on me once in a while.

A few weeks ago, he stopped by my shop for a visit and I mentioned a problem I was having with one of the vehicles in the bays. I already had it diagnosed and was waiting for an approval from the customer for the repairs. Bo thought it would be a pretty cool idea to test it on his scope, which he just so happened to have with him. I thought, sure, why not, two heads are better than one. Sounds like a perfect time to get a second opinion on the problem.

His results exactly matched my results. The #5 cylinder had a low voltage (ground side signal) response from the PCM. It was easy to spot using two channels on the scope and comparing readings from a known-good cylinder and the suspected bad one. Bo and I enjoy comparing notes on stuff like this. It gives us two scope junkies something to do on an afternoon when the shop is slow.

Bo is no stranger to the auto repair business, as he used to own a repair shop years ago. We can sit around for hours trading war stories about car problems, customers and what it’s like to run a small business. Quite frankly, it’s a great stress relief to kick back a bit and chat with a fellow tech who has experienced the same things as yourself.

On this one particular afternoon, the conversation soon went from cars to cancer. He jokingly laughs at his bills that are coming in from every different direction. They are from different doctors, different hospital departments, the anesthesiologist, the nursing staff, the desk clerk, the janitor, the waiting room attendant, and so on. Like I said, Bo is not the kind of guy who lets anything get him down. He jokes about the situation, even as serious as it is. “I think the parking lot attendant at the hospital is even sending me a bill,” Bo laughingly remarks. “You know, sometimes I think they’re just inventing people that I’ll have to send a check to; everybody wants a piece of the pie.”

Bo went on to say, “You know, I don’t think a customer in an automotive repair shop would even consider paying for the various people involved in their car repair. I’ll bet the cost would triple, if not more.”

I can’t argue with that. Here we are, two professional techs examining our “patient” and it’s highly unlikely the customer is even aware of the effort that is being put into diagnosing their car. As with a lot of trades, the automotive field is no different; no one person knows it all. There are so many times that a second opinion can make all the difference in the world. I’m sure a lot of techs (including myself) get field calls from other techs looking for some clues or information that might help them solve a problem.

It’s probably asking too much for a customer to undertake the responsibility of paying for all the services rendered over the course of repairing their vehicle. Most of the time they are totally unaware of all the phone calls, research and information exchange that goes on between techs to solve a problem. It would only lead to higher repair bills and it just wouldn’t work with the economy we’re in.

As Bo and I sat there solving world problems, we both knew that, in some cases, price-conscious drivers would sooner look for someone who will make cheaper repairs vs. a more expensive repair shop that will ensure a lasting repair.

The likelihood of the general public understanding the complexities of proper diagnostics on today’s cars will continue to be overshadowed by those techs who would rather gamble on replacing a few cheap parts than conduct a thorough examination. As Bo puts it, “This is truly the cancer in the automotive repair industry.”

Bo mentioned how he had several different diagnoses and how each doctor had their own version of how to make the “repairs.” It took several attempts to finally get his cancer problem properly diagnosed and solved. It reminds me of how often someone will go to a shop and have a few parts swapped out, and then to the next shop to have even more parts changed, only to finally end up at a shop with the proper tools and equipment so its techs can correctly diagnose and solve the problem.

Bo might be right about this one; it isn’t the car, it isn’t the parts, it’s the so-called “repair” shops that don’t make the effort to diagnose a problem correctly before their techs start twisting nuts and bolts on the car. Our collective diagnosis is…that’s one of the cancers in the automotive repair industry that needs to be cured.