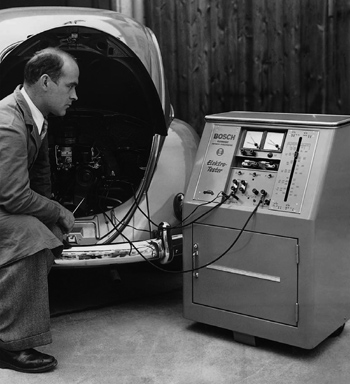 Before my father passed away, we spent several years under the hoods of cars working together at my shop. He was an old-school repair guy who was always looking out for the customer, and wanting to do that little bit extra for them. You know, adjust that crooked license plate, grease the door hinges before they pulled away from the shop, that kind of thing.

I usually did the diagnostic work, and he would stick with the mechanical repairs. But, most of the time, his favorite thing to do was to entertain the customer while I figured out the problem. The one thing that would give him fits was the way a customer would react after I diagnosed the problem, especially if I diagnosed it quickly.

I got the impression that a quick diagnosis led to some sort of mistrust with my abilities, or that I didn’t thoroughly examine the problem to their satisfaction. A lot of times, it had more to do with the previous technician taking so much time and not coming up with an answer, so they think it can’t be that simple.

Dad had his own answer for it. He was going to get one of those aluminum foil-like fire suits, a couple of tall curtains on moveable stands, a disco ball and some strobe lights. His idea was to pull the car into this “special” diagnostic area, turn on the strobe lights and hang the disco ball over the car, stick the suit on and make some comment like, “I’m going in…” and then let the light show begin. After a few minutes, he’d come out from behind the curtain wall, whip off the aluminum fire suit hood and say something like, “Whoo that was a tough one.” Maybe then, these types of people would be more likely to believe the results of a quick diagnosis.

We never tried it, but I think about doing it from time to time. With the advent of scanners to read and show detailed parameters, diagnostics has taken on a whole new approach. A lot of problems are solved by correctly following the diagnostic tree to get to the source of the problem. (Codes don’t fix cars; codes are the starting point.) Sometimes it’s a quick trip on the diagnostic ladder, and other times it’s quite lengthy. It really depends on the problem, of course.

Trying to be quick and on the right track with every diagnosis is what makes the money in the shop. Stalling the results just for the sake of making it look like it was an extensive search to find the problem doesn’t make a lot of sense to me. Then, on the other hand, I sometimes believe this is one of the many reasons why a doctor has you wait so long for his 10 minutes of time. Even though he may have walked into the exam room, looked at the chart, took some quick looks at you and was back out of the exam room in less than 10 minutes, I’ll guarantee his bill isn’t going to show only a 10-minute charge on it. But, in my business, time is money and most ­customers are watching the clock.

Back in the days when my father and I worked ­together, he came across an old Bosch injector tester for the early K and L injection systems. The old tester was not only dated, but it also had several missing connectors and the information booklet didn’t come with it. I took it apart and rewired it as a large voltmeter, with a lighted buzzer attached to a separate set of wires. We then rigged up a swinging arm out of PVC pipe and mounted it to the wall. The pipe contained the wires to the tester that we also mounted on the wall. It was more for decoration than it was useable, but it was kind of cool in its own funky way.

Anytime we got one of those “lookylews” (one of my dad’s favorite words); you know the type, the kind who has to hover over the hood while you’re working on the problem, Dad would motion to me to wire up the buzzer to the battery, and use it as a way to find the draw or short in the car.

As I would get close to finding the problem, I would intentionally ground out the buzzer on the wall, and it would make a horrible noise. Dad would make a comment to the customer as to what was going on. His old-school charm was what made the difference. At times, this whole thing would get quite humorous. I’d be lying under the dash zapping the buzzer and good old Dad would be working his magic with his broad smile, and his quirky sense of humor.

These days, electronic scanners have somewhat evened out the playing field. To some degree, the abilities of a good tech are now wrapped up in a good-quality diagnostic machine. But, it still takes a good tech to understand it, and evaluate the information he/she sees on the screen.

I still try to diagnose things as fast and accurately as I can. I don’t have the old buzzer, or my dad’s inventive conversations with the customers, to help me with the diagnostics. It’s a memory I’ll never forget. But, I’ll always keep in mind some of those lessons from my father: “Take your time son, you’re good…but they (the customer) don’t know how good you are…so you’ll have to prove it to them each and every time.”

Old school wisdom is still important, and fatherly advice is some of the best.