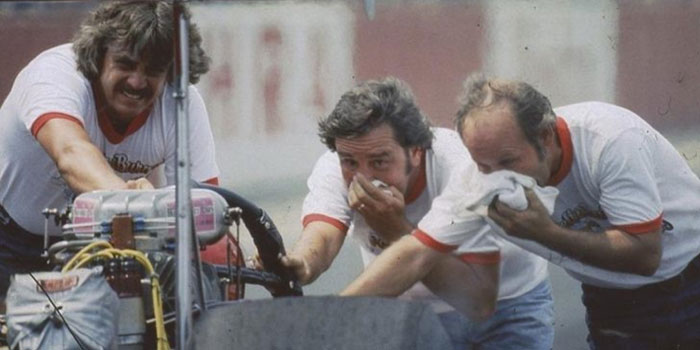 According to most hot rod historians, nitro’s first competition use in America was by Vic Edelbrock Sr. and his associates. In the late 1940s, Midget racer Ed Haddad came into Vic’s shop with a gallon can of nitromethane he’d been given by one of the Dooling brothers, who manufactured slot cars (the tethered miniature cars that ran on a circle track popular in the 1940s and 1950s). Ed didn’t want any part of the new fuel because he had heard “it will blow up in your face.”

I have a large library in my office consisting of Hot Rod How-to books and annuals from the 1940s, ‘50s and ‘60s. During one of my recent review sessions I found a chapter introducing nitromethane and its use for drag racing. Keep in mind this is 1954 technology …

The article began by explaining that hot rodders of 1954 had basically exploited every possible means of inducting more oxygen into the cylinders of an engine through improvements in volumetric efficiency. “No matter how much fuel is delivered to the cylinders, the point has been reached that not enough oxygen can be introduced to make the fuel burn efficiently.

“Nitromethane is however, quite dangerous and has a lasting harmful affect on everything it touches. If spilled on the painted surface of a racecar, nitromethane will run off onto the ground, taking the paint of the car with it. If nitromethane is left in a metal storage can, it will eat the bottom out within a week’s time. It is also very toxic to humans. Care should be exercised to avoid exposure to the skin and lungs.

“Larger fuel lines, bigger carburetor jets and dump tubes, are some of the changes necessary when converting to nitromethane. An excess of nitromethane is needed within the cylinder so that enough water is created during the combustion process to cool the valves and pistons. Not enough nitromethane will cause an engine to melt down … literally. Popular proven mixtures include 95% nitromethane, 5% alcohol / water and castor oil.

“It is also common to see the tachometer read 2,000-2,500 rpm for up to 10 seconds after the fuel is shut off. This is common until the cylinders cool down enough to stop igniting the leftover nitromethane.

“Lower compression ratios are also necessary with the use of nitromethane. The top Flathead Fords on the West Coast now run a compression ratio of 6:5 to 1. However, when the engine is running at top speed, the cylinders build compression higher than conventional 12:1 full race engines.

“Nitromethane is not for everyone; it can cost as much as $9 a gallon in some locations compared to methanol alcohol that typically costs $0.60 a gallon. Other less expensive combinations have been tried, including nitro/hydrogen peroxide, nitro/benzene, nitro/benzoyl, nitro/acetone, nitro/
di-ethel ether, nitro/picric acid, and nitro/propane. Dyno testing results have proved however, that nothing is as efficient or as consistent as nitromethane.

“Currently, the only other alternative to nitromethane is a secret formula developed and recently introduced by Wilcap Automotive in Los Angeles.

“This formula costs $10 a gallon and burns at the rate of 3/4 gallon per mile. It is used at no more than 30 percent strength and is said to provide the same results as a 90 percent mixture of nitromethane. Many records have been broken at southern California tracks using this new mixture. The only drawback is the solution is extremely destructive to engines not specially built for its use.” What Exactly is Nitromethane …?

Nitromethane is known as a monopropellant fuel, which means it has the potential to combust without any air at all. That’s why nitromethane was once used as a rocket fuel. Fortunately for hot rodding, nitromethane also has industrial-world uses, primarily as a dry cleaning solvent, which makes it readily available.

According to most hot rod historians, nitro’s first competition use in America was by Vic Edelbrock Sr. and his associates. In the late 1940s, Midget racer Ed Haddad came into Vic’s shop with a gallon can of nitromethane he’d been given by one of the Dooling brothers, who manufactured slot cars (the tethered miniature cars that ran on a circle track popular in the 1940s and 1950s). Ed didn’t want any part of the new fuel because he had heard “it will blow up in your face.”

Edelbrock, Bobby Meeks and Fran Hernandez added 10 percent nitro to the methanol in their 136ci V8-60 Midget car engine. With no tuning or familiarity with nitro, Vic Jr. recalls that the strange brew “just about broke the beam on Dad’s old 200hp-capacity Clayton dyno. The spark plugs were so hot they turned into glow plugs. When they tried to shut it off, the engine kept running. They finally had to throw a towel on it to get it to quit.” The engine was toast, but eventually they learned to add lots more fuel, colder spark plugs and stronger internals to stand up to both the higher output as well as nitromethane’s corrosive effects. The Stromberg 81 carbs had to be nickel-plated, as did the fuel containers (hidden from prying eyes inside cardboard boxes).

Eventually, Edelbrock settled on a 20 percent nitro / 80 percent methanol mix that added 40 hp. Edelbrock was able to keep the fuel a secret for a while, but with flames coming out of the exhaust, fellow racers knew something was up. Vic disguised the distinctive odor by blending in a little orange oil.

By 1952, an Edelbrock Ford flathead running 40 percent nitro had run 201 mph one way at Bonneville (before the exhaust valves got sucked into the ports). With the word out on the new fuel, the article appeared in the Hot Rod Handbook 1954 edition. The burning question everybody wants to know is…how come so many flames out the exhaust headers?

The simplest explanation is that much more nitro is being delivered to the cylinders than can be burned. That is done on purpose, not for the horsepower advantage but to help cool the cylinders, to keep the engine from melting down.

Burning eyes, skin and throat is common with nitromethane fumes.

The excess nitro fuel goes out the exhaust, where it immediately ignites on contact with atmospheric oxygen, burning with a characteristic yellow flame. If the rich mixture has entered into the monopropellant phase, hydrogen and carbon monoxide are produced as a byproduct. Bright white flames are then generated by the burning hydrogen. The burning of this excess fuel is what provides that distinctive crackle sound. It will also burn your eyes and your skin as shown in the picture above. Not all of the nitromethane coming out of the exhaust headers will burn because of the volume of fuel present. Initial start-up with high nitro concentrations is very tricky. According to those in the know, “You must get the engine cycling. It won’t start up spinning at 200 rpm like a gas engine would. You need to get some heat in the engine and spin it at 1,800 to 2,000 RPM.”

There’s so much fuel pouring into the cylinders that failure to get the engine spinning fast enough before controlled ignition can hydro-lock the engine, or even blow a head off. The common practice is to start and warm up the engine on gas or alcohol then switch over to the nitromethane.

The high percentages of nitro have led to massive breakthroughs in ignition technology. Today’s top-of-the-line MSD units put out 50,000 volts and 44 amps on the top end. That’s about the same output of an arc welder at each cylinder-and today the top fuelers run two of them.

Once you get a nitro engine going, it may not want to stop. At 7,500 RPM on the top end, there’s so much heat in the engine it may keep running under auto ignition even if you shut off the magnetos. Essentially, it becomes a diesel. Fuelers today, shut down by turning off the fuel pumps and ignition.

Once you see the flames, experience the smell and hear that unique crackle sound of the burning nitromethane out of the exhaust headers, you will be hooked. There is no other experience like it!

Advertisement
In this article:fuel, Nitromethane, Racing