Foul Smell in Camry Turns Out to Be Dead Snake – UnderhoodService

The smell was so bad in the car, a Camry owner in Thief River Falls, MN, wasn’t even able to get into the car. To make matters worse, the owner couldn’t find any auto repair shops in the area willing to tackle the problem. Finally, the Bodyworks in Baxter, MN, took on the challenge and found a dead three-foot-long boa constrictor wedged in the floor structure underneath the driver’s seat.

Below is the article as it appeared on the Brainerd Dispatch website. 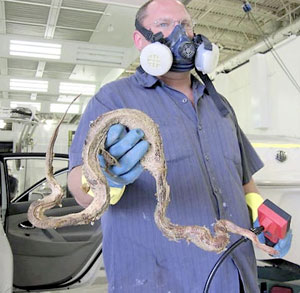 Imagine a car odor so foul, so vile, that it might have driven the owner to consider junking a virtually new car. That situation was the task that greeted Mike Glomski, a marine repair specialist at The Bodyworks Super Collision Center in Baxter Friday.

The culprit was an escaped boa constrictor that wedged itself into the floor structure underneath the driver’s seat and died. Sidney Osterman, general manager of the Bodyworks, said the smell was so bad the owner couldn’t get in the car. The owner couldn’t find any auto repair personnel in the Thief River Falls area who would touch it. Eventually the owner contacted the Bodyworks.

“We have a reputation for taking anything on here,” Osterman said Tuesday.

To read the entire article on the Brainerd Dispatch website, visit http://brainerddispatch.com/news/2011-06-29/snake-car.