A women in Braintree, MA, took her vehicle to a local repair shop because the check engine light was flashing on her dash. When the technicians opened the hood, they found a nest filled with baby squirrels that were about a week and a half old. It cost the vehicle owner $642 to replace all the wiring that had been damaged.

Below is the article as it appeared on the WHDH-TV Channel 7 website. 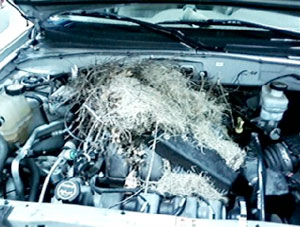 BRAINTREE, Mass. – A woman in Braintree made a startling discovery under the hood of her car Wednesday.

Joanie Ranahan was just having a little engine trouble, so she took her car to a mechanic. The problem was totally obvious – there was a family of squirrels nesting inside.

“They said ‘you are so lucky your whole engine didn’t go on fire,’” said Ranahan.

The source of her flashing “engine warning” light was a whole cluster of newborn squirrels.

“I went into the garage, and the hood’s up, and there’s like 10 people looking into my engine,” said Ranahan. “There was a squirrel’s nest, and it was like, cocoon-like. There were sticks and hay. It was crazy, I don’t know how she built it so fast, because 3 weeks before, I put fluid in for the windshield wiper. There was nothing there then.”

The squirrel had chewed through so many wires, the mechanic told Ranahan her engine could have ignited at any second, and she had been driving her car everyday.

To read the entire article on the WHDH-TV Channel 7 website, visit http://www1.whdh.com/news/articles/local/12003922224038/squirrel-s-nest-stalls-engine-in-braintree/.