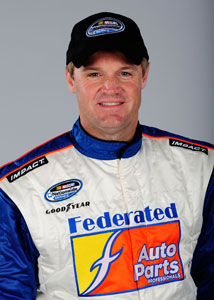 Continuing a successful relationship that began last season, Federated Auto Parts will be a sponsor of popular NASCAR driver Kenny Wallace and his race team in 2011.

“We started working with Kenny Wallace last season and the relationship was a great addition for Federated,” said J.R. Bishop, director of racing and event marketing for Federated Auto Parts.  “Kenny truly understands our business. Our members and their customers really hit it off with Kenny last year and we had some great hospitality events surrounding Kenny’s races.”

Federated will be the primary sponsor of Wallace and his race team in over 50 dirt track events in 2011. At many of these dirt track races, Federated will conduct hospitality events for its members and their customers.

Wallace and fellow Federated spokesperson Kenny Schrader will participate in the fourth annual “Get Dirty with Kennys” promotion where several Federated members will get a chance to race dirt track cars against these two legends of racing.

“Kenny Wallace is a great representative for Federated Auto Parts and we look forward to another year working with him and his race team,” said Bishop.