Federated Auto Parts and its drivers, Ken Schrader and Tom Hessert, have gone pink – the Federated teams will showcase special paint schemes for the month of October in honor of Breast Cancer Awareness month. 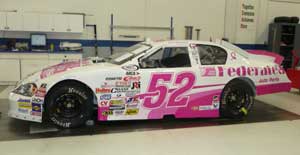 “Tom and I are proud to be running special paint schemes on our Federated Auto Parts cars all this month,” said Schrader, the longtime Federated spokesperson.  “We have lost too many friends to breast cancer.  If we can help in the fight against this disease and build more awareness for women everywhere, then we’re all for it.  The cars will certainly stand out and make a statement – an important one for all of the women in our lives.”

Schrader will sport a Breast Cancer Awareness scheme on his No. 9 Federated dirt modified car which he will race throughout the Midwest during October.  Hessert will drive his No. 52 Federated Pink Chevrolet in the final two races of the ARCA Racing Series presented by Menards.  Hessert’s car will make its first appearance at the Kansas Speedway in Kansas City, KS, on Oct. 7 and then again in the season finale presented by Federated Car Care at the Toledo Speedway on Oct. 16.  Hessert is currently seventh in the ARCA point standings.

In conjunction with the Federated Auto Parts special paint schemes, R & R Enterprises has produced an exclusive line of merchandise to support the team’s campaign.  Schrader’s wife, Ann, will be participating in the Avon Walk for Breast Cancer in Charlotte, N.C. on October 22-23, 2011 in honor of two longtime friends, Lisa Meloni and Laura Jones, who both lost their battles with cancer.

Included in the “offering” are t-shirts, license plates, decals, dog tags and a ladies hat. Designs feature trendy graphics in vibrant shades of pink and blue that complement the KSR team and sponsor logos.  Showcased in pink, the racing theme featured throughout the merchandise will appeal to everyone. Merchandise may be ordered online at www.r-ronline.com, www.r-rracewear.com, by phone at 877-730-6953, and on www.schraderracing.com.

“The Avon Walk for Breast Cancer will be a challenge and is just one way to honor my two dear friends Laura and Lisa,” said Ann Schrader. “I’m thankful to Federated Auto Parts for supporting this, and many other causes in which Ken and our team participate. J.R. Bishop came up with a great paint scheme and R & R has produced some darling merchandise that has true meaning behind it. Ken’s fans have been very generous in supporting my fundraising goal.  I’m hoping that Ken and Tom can put the Federated cars in victory lane to bring even more awareness to the fight against breast cancer!”

To learn more about the KSR, Inc. Breast Cancer Awareness campaign, visit www.schraderracing.com or call 704-788-8315. You can follow the Federated Auto Parts racing teams on Facebook via the Ken Schrader Racing, Inc. page.