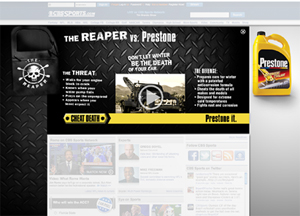 Although it might seem trivial, checking the levels of antifreeze/coolant, fuel additives, and even windshield washer fluid is essential to maintaining the “life” of your car — especially in the harsh winter months, according to Prestone.

This is the central message that Prestone wants to communicate to car enthusiasts, DIYers, technicians and anyone looking to extend the life of their car. Prestone’s new advertising campaign, titled “The Reaper,” will launch in never-before-targeted placements like NFL games and during Ultimate Fighting Championship matches starting in September.

The company says the new campaign emphasizes the power that Prestone products have to help drivers cheat the death of their cars by pitting the brand against death, or in the case of the campaign, “The Reaper,” a vintage, black tow truck. The exaggerated premise reinforces the role Prestone products have in keeping cars running smoothly, as well as preventing any unwanted and untimely visits from “The Reaper,” according to the company.

“Underscoring the effectiveness of our product in an edgy, fun manner was central to the creation of ‘The Reaper,’” said Sharon McLenahan, marketing director for Prestone. “During our recent research, we learned a key insight that while consumers care about the performance of their cars, they care even more about keeping their cars running without issues, and not having to worry about their cars dying unexpectedly on the side of the road.  As demonstrated in the ads, we hope consumers are inspired to thwart the ‘death’ of their cars, especially during the coming winter season, with the help of Prestone’s patented anti-corrosion antifreeze, De-Icer, fuel additives or other products.”

The campaign is being supported by English and Spanish-language television spots in addition to digital components and emphasizes Prestone’s antifreeze, De-Icer and fuel additive products. The digital ads will appear on sites such as UFC.com, CBSSports.com – Fantasy Football, SB Nation and eHow. In-store activation will be supported by point of sale materials at automotive stores across the country where Prestone is sold and will include header cards and tent cards.