Stretch Belts: Everything You Need To Know 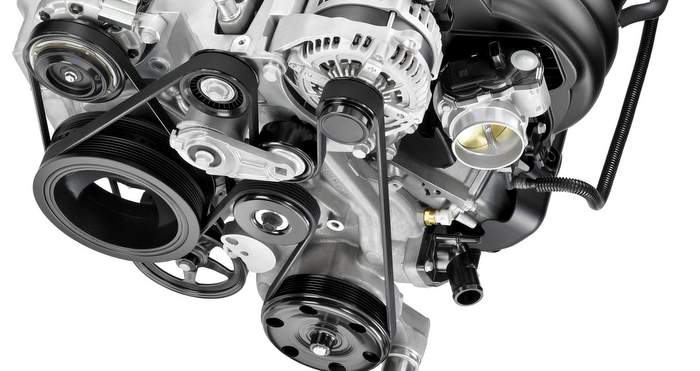 Stretch belts can take loads off of the main accessory belt drive, allow for better packaging and solve NVH problems that can occur with a longer serpentine belt. Less belt means less tension with fewer noise and vibration problems. More stretch belts are hitting the market and may become the belt of choice as accessory drive components are removed from the front of the engine. 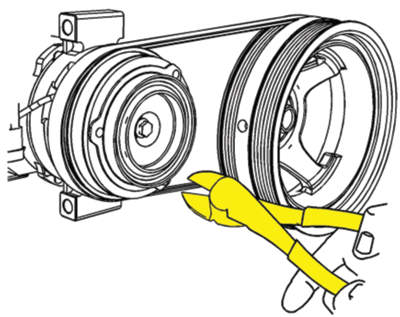 If you see a belt on a late-model vehicle that does not have an automatic tensioner and runs between just two or three components, it’s probably a stretch belt. Some OE belts will have the words “stretchy” or “stretch” written on the back. These types of belts typically are used to drive the water pump, A/C compressor or power steering pump.

Stretch belts can last 100,000 miles or more, but this can vary dramatically depending on the vehicle’s environment and where it is mounted. This is why inspection is recommended — you cannot simply go by mileage recommendations.

When a stretch belt exceeds wear specifications, it’s no longer able to effectively grip the pulleys and will start slipping. The primary cause of slipping is material being removed from the belt’s grooves, not belt stretching. Over time, small debris and the interaction with the pulleys will wear the shoulders and valleys of the grooves. When the grooves become too shallow, the pulleys bottom out. When this happens, the walls of the groove are no longer gripping the pulley and it slips. Inspecting the depths of the grooves is critical to when determining replacement. 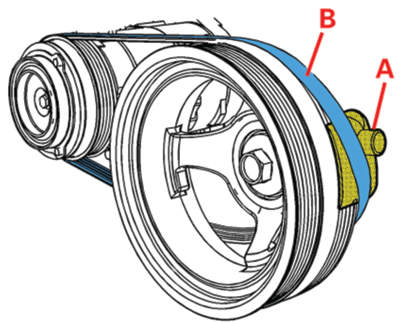 When inspecting a stretch belt, always measure the depths of the groove with an inspection tool because the differences between a worn belt and a good belt can’t be seen or felt. The new materials used to make a stretch belt might crack or separate like older belts before the grooves are worn. Belt gauges are available from manufacturers and distributors, so check their websites or ask your distributor.

Poor alignment is the number one cause of belt noise and premature wear of stretch belts. If the pulleys have poor alignment, the belt will be worn on the edges and might look frayed.

If you are removing an old stretch belt, cut it. If the belt is still in excellent shape, you can remove the belt with the correct belt tool in order to reach other components, but it’s highly recommended just to replace the belt if you don’t know the history. 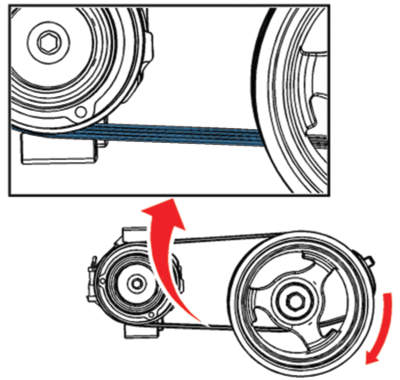 These belts have an elastic core that is designed to keep tension on the pulleys. Stretch belts are designed to stretch over one of the pulleys during installation, usually the crank or the largest pulley.

Never use a screwdriver or other sharp object to install the belt because if the belt is cut or the surface or grooves of the pulleys are damaged, the belt will eventually fail.

Special tools are available from various tool and belt manufacturers that act as a ramp on the leading edge of the pulley. Some applications will require special tools to hold the belt on the accessory pulley, like for the Subaru A/C compressor pulley.

There are many tool designs, but they all do the same task of pulling the belt over the leading edge of the crankshaft pulley without damaging the belt. Always follow the directions for proper tool placement and the correct direction to turn the crankshaft.

On smaller width stretch belts that are driven by the camshaft, like on some Ford and Mazda V6 water pump applications, you can use zip ties to install the belt. Simply zip tie the belt to the camshaft pulley and turn the engine until the belt is seated, then cut the tie. This method can also be used to keep some belts in place during installation.

• Always sell both belts together. Most serpentine belts wear at the same rate and have to be removed to service most stretch belts.
• Check the catalog for any additional parts like idler pulleys and special tools.
• Some belt companies have phone apps that can measure and document belt wear.
• Most belt companies have videos online that can be used by technicians for installation and service writers to sell to the customer.