EngineQuest (EQ), a leading supplier of stock and performance cylinder heads and engine components, launched its "Head to Vegas" promotion on July 1, 2011. The grand prize winner will receive a seven day, six night trip for two to attend IMCA’s Duel in the Desert event at the Las Vegas Motor Speedway in November. 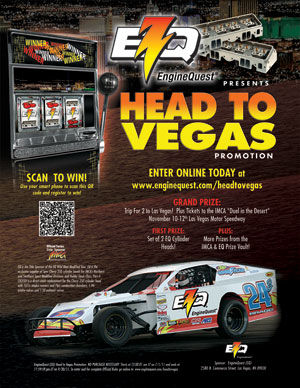 The Grand Prize includes airfare for two to Las Vegas, ground transportation to and from the hotel, a six night stay at an area hotel, and Duel in the Desert race tickets for the event. The First Place Prize winner will receive a set of high-performance EQ Cylinder Heads. There are also multiple second- and third-place prizes of IMCA- and EQ-branded wearables including jackets, hats, sweatshirts and tees.

For complete contest rules and to enter EQ’s "Head to Vegas" promotion, visit www.enginequest.com/headtovegas. The promotion ends on September 30, 2011.

EQ is a general sponsor of IMCA racing and in its fifth year as the title sponsor of the EQ Cylinder Heads IMCA Modified Wild West Tour. In addition, EQ provides contingency awards to the opening feature winners in five IMCA divisions during the 2011 season.

EQ’s early 350 cylinder head (#CH350I) is approved as a direct replacement for the IMCA Northern and Southern Sport Mod Divisions and Hobby Stock division and has become the head of choice by the most competitive teams. EQ’s high performance 23° cylinder head is approved for use in the EQ Cylinder Heads Wild West Modified Tour.

To find out more about the EQ "Head to Vegas" promotion, visit www.enginequest.com/headtovegas.