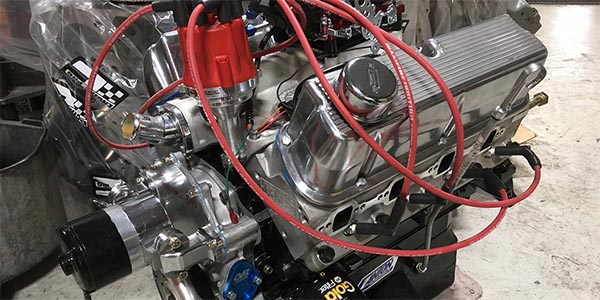 The engine took four years to complete. The build was worth the wait. Find out what went into it!

Sometimes, engine projects can take a long time. When things don’t go according to plan, they can take even longer. Just ask John Duncan, an enthusiast from Fort Collins, Colorado, who has been waiting for over four years to get his 302 stroker 349 cid small block Ford engine finished and finally installed in his 1973 Bronco.

“I am in the process of putting it back together right now,” Duncan says. “I have been trying to get this engine built the right way for over four years. The first shop that did the work failed to set the correct spring pressures, they never line honed the crank mains, they bored the cylinders way out of round, they had the oil pump driveshaft installed upside down, the cam was not decreed, they also had the wrong length pushrods, the engine had leaks, and they never bothered to mill the heads as I asked.”

The result was a motor that was only 9.6:1 compression instead of the 11.6:1 it should have been, and it completely destroyed every bearing in the engine. Needless to say, John took his small block Ford engine elsewhere.

This ‘71 casting came from the factory with an 8.229˝ deck height and only had .009˝ removed during the first build, leaving the deck height at 8.22˝. The pistons, crank and rods assembled together netted an 8.19˝ compression height, leaving the cylinders over .039˝ down in the bore on what was supposed to be a zero deck build.

“The first shop’s horrible work still netted 440 horsepower on the dyno and 440 ft.-lbs. of torque,” Duncan says. “However, I knew something was wrong. I took the engine to get documented at another shop in Englewood and the findings were horrid, as you can imagine.”

The second machine shop cc’d the chambers on the as-cast heads and found the chambers to be 62cc from the factory instead of the 58cc claimed. The heads got milled .060˝ to get to 52cc, and the deck was milled .039˝ so that the compression ratio was at the 11.6:1 John wanted originally.

“This compression is needed in order to use an aluminum head for this build,” he says. “The cranking pressure measured at exactly 180 psi, which is safer than safe for 91 octane pump gas. These corrections are necessary at 5,000 feet elevation, otherwise if I would have run the engine less than 11:1 compression, the motor would be way down on power. If you don’t run at least 180 psi of cranking pressure with an aluminum head, you are throwing torque and horsepower down the drain.”

For the camshaft on the 349 cid small block Ford, Duncan used an Isky hydraulic flat tappet cam with an oval track lobe ground on a single pattern for the highest possible torque output.

John is also using 1.72 ratio Scorpion rockers and lift at the valve should be roughly .574˝ with the higher ratio, but since the pushrods were too short, the lift at the valve was lower than it should have been at .540˝.

“The builder swore the engine would not spin faster than 5,700 rpm due to the long stroke,” he says. “Isky told me my cam should not hesitate to spin at least 6,500 rpm with my setup. We added a single plane Victor Jr. intake thinking that the Performer RPM was not enough flow for the combo and it allowed the engine to make peak power at 5,200 rpm instead of 5,700 rpm.”

“This engine will make 550 hp at 5,700 rpm and 530 ft.-lbs. of torque at 5000-ft. elevation,” he says. “It’s a real stump puller. Changing head gaskets and pushrod lengths will net greater torque and horsepower without a doubt. When I have the engine back together it will be closer to 600 horsepower still running 91 octane here in Denver.”

For less than $7,000 total in this build, getting nearly 600 hp on pump gas and a street cam at a mile of elevation is nothing short of a miracle. While it took four years to complete, the build was worth the wait.

“It will spank just about every small block Ford in an inch/inch or dollar/dollar test,” Duncan says. “Considering there is almost 15% horsepower loss from sea level to Denver, it will make the same power and then some lower in the rpm range at sea level. This is also a naturally aspirated engine, no boost needed.”