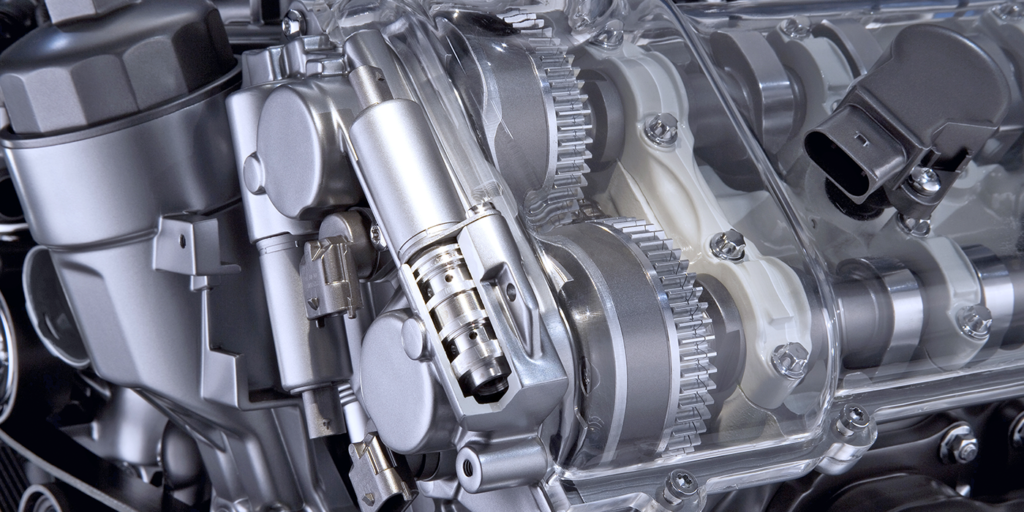 Here are seven diagnostic strategies that can be applied to any vehicle with variable valve timing problems.

Check for a screen: The passages in the oil control solenoid and actuator can be tiny. Toyota, Honda and just about every manufacturer have a metal screen filter to prevent debris in the oil from reaching the variable valve timing system.

Some manufacturers make the screen serviceable but on some vehicles, it could be inside the oil control solenoid and almost impossible to inspect or even clean. If the screen can be serviced, the procedure will be in the service information or TSB. Some manufacturers may recommend removing the filter screen.

Disconnect the oil control solenoid before scoping the camshaft and crankshaft waveform: If you are trying to determine if a timing chain has stretched or has jumped, you need to make sure the camshafts are locked.

Most actuators have pins that slide into the actuator’s two parts when the oil pressure drops below a specific level. The pins prevent the camshaft from moving during startup when oil has not yet reached the top end of the motor.

If you measure the position of a camshaft relative to the crankshaft and the actuator is not locked, the waveform will not match a known good waveform. The waveform may look like the chain has jumped, or the sensor wheel is broken.

The Variable Valve Timing System is for Emissions and Performance: On many engines with variable valve timing actuators on the intake and exhaust camshafts, there will not be an EGR valve or secondary air injection system. Both components have been replaced by the variable valve timing system. To provide an EGR function, the exhaust cam is fully retarded, which adds lots of overlap. As a result, the exhaust gas remains trapped in the cylinder. This detail allows a reduction in hardware and service issues from carbon.

Opening the exhaust valve later retains more exhaust pressure in the cylinder, causing pushback to the intake charge and exhaust gas retention. On some systems, the intake camshaft is advanced at part throttle and WOT. The intake valve sooner and allows exhaust gas into the intake stroke, which has an EGR effect. Engines can also use valve overlap to allow extra oxygen to reach the catalytic converters. This extra oxygen and fuel can help the catalyst get up to temperature sooner to reduce startup emissions. If you have a vehicle with oxygen or catalyst efficiency codes, they might be related to the variable valve timing system.

Power and Grounds: Variable valve timing systems use sensors and actuators. A bad ground can cause the sluggish performance of the oil control solenoid. Resistance in the wiring to a sensor can cause a code or make for a lousy waveform.

Use the service information: As you might have already guessed, VVT diagnostics are very application-specific. VVT diagnostics not only depend on whether the engine is an in-line or V-type block, or a SOHC or DOHC configuration, but also the configuration of the phaser and system electronics. Also, there are dozens of “global” P0010- and P0340-series trouble codes, not to mention manufacturer-specific P1000-series codes that can be stored due to a valve-timing problem. But by applying basic operating principles, it’s possible to diagnose most VVT failures, regardless of configuration.

Rule out the Oil and Filter: Engine oil viscosity and oil filter flow can affect the ability of the cam phaser to control valve timing, as can the service life ratings of the oil. Changing the viscosity in a 5W20 to a 5W30 oil can cause issues with the variable valve timing system. You might want to change the oil before continuing with further diagnostics.

The Variable Timing Happens All the Time: Early variable valve timing systems were only active in higher RPM ranges and under specific conditions. Late-model systems are actively adjusting the positions of the intake and exhaust camshafts for the best possible efficiency. Using a scan tool to watch the live data during the test drive can be helpful. Some vehicles have data PIDs for both the actual and targeted/desired position.

When servicing a VVT issue, take your time and follow the steps.
This video is sponsored by Standard.