Emission controls on cars and trucks have one purpose: to reduce the amount of pollutants and ­environmentally damaging substances released by ­vehicles.

In this column we will take a look at exhaust gas recirculation (EGR), one of the four major basic system control components used on all ­systems today. 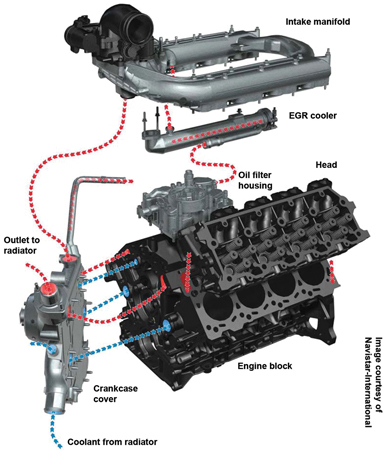 For consistent driveability, it is desirable for the amount of exhaust gas flow to be proportional to the throttle opening. Driveability is also improved by stopping EGR when the engine is started up cold, at idle and at full throttle.

Early EGR
The first EGR valve appeared in 1973 on General Motors cars. Bolted to the intake ­manifold next to the carburetor, it had ports to the intake and exhaust manifolds. It had a diaphragm that pulled open a valve stem, which allowed exhaust to enter the intake manifold when ported vacuum was applied to it. Ported vacuum increases with throttle opening. A thermal vacuum switch prevented vacuum from reaching the EGR during cold engine starts.

This system, however, had problems. It would often open too soon or too much, which caused a hesitation with acceleration as massive amounts of recalculated exhaust hit the combustion chamber. Many people simply disconnected it when it began to cause a problem.

By 1975, if you unplugged an EGR valve, you’d end up having an engine ping driveability complaint.
Manufacturers of that era experimented with vacuum orifice restrictors and vacuum delay valves to try to find a happy medium between clean air and performance.

By 1981, closed loop computer controls were in place. EGR flow was now more carefully controlled with dual diaphragm and backpressure EGR valves. The flow of vacuum was further controlled by solenoids that blocked the vacuum ported until certain criteria were met, such as engine temperature, rpm and manifold absolute pressure (MAP). As the vehicle manufacturers began to use these complex schemes with vacuum amplifiers, delay valves and solenoids, they added a lot of “spaghetti” to the engine compartments.

Plastic vacuum connections would break or rot with age and were not reliable. Vacuum diagrams were invented and became essential to the smog driveability technicians of the day. As these systems evolved, they had fewer parts and less vacuum tubing. This was achieved by the use of pulse-width modulated EGR solenoids. The PCM controlled EGR flow through the use of these solenoids to modulate vacuum to the EGR valve instead of just turning it on or off periodically. 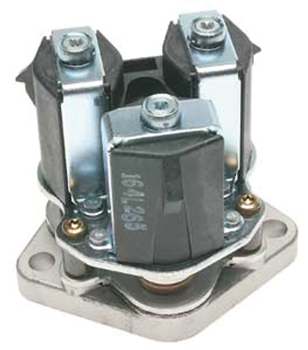 Once the PCM receives its inputs, such as rpm, throttle angle, coolant temperature and MAP, it then calculates a response based on the software program that is embedded into it. Next, it makes its decision and sends a command in the form of a pulse-width modulated signal to turn the EGR solenoid on and off rapidly. The EGR solenoid has two vacuum nipples. One side gets either manifold or ported engine vacuum. The other nipple goes to the EGR valve. Its default position is to block vacuum to the EGR valve. A vent is incorporated to bleed off vacuum when the solenoid is being pulsed. Vacuum flows to the EGR in rapid on-off pulses as the solenoid is commanded by the PCM.

With each succeeding year, EGR designs in OBD I systems became more refined. The California Air Resources Board (CARB) liked GM and Chrysler’s onboard diagnostic systems. In 1988, CARB required that all cars sold in California be equipped with an onboard diagnostic system and a check engine light to notify the driver of emission system failures. By this time, all manufacturers had to have an EGR system that was capable of alerting the driver if it wasn’t working. OBD I diagnostics and trouble codes were added in to flag opens, shorts and sticking solenoids.

OBD II requires that EGR systems be monitored for abnormally low or high flow rate malfunctions. The EGR is considered to be malfunctioning when an EGR component fails or a fault in the flow rate results in the vehicle exceeding the Federal Test Procedure (FTP) by 1.5 times. FTP is the government-mandated drive cycle smog test that all new cars must pass and adhere to.

In a negative backpressure EGR valve, a normally closed bleed port is positioned in the center of the diaphragm. An exhaust passage is connected from the lower end of the tapered valve through the stem to the bleed valve. When the engine is running at lower speeds, there is a high-pressure pulse in the exhaust system. 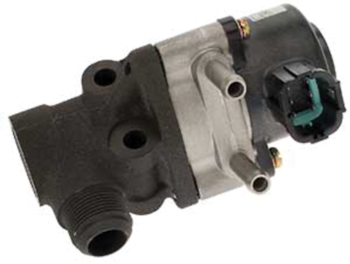 However, between these high-pressure pulses there are low-pressure pulses. As the engine speed increases, more cylinder firings occur in a given time and the high-pressure pulses become closer together in the exhaust system. At lower engine and vehicle speeds, the negative pulses in the exhaust system hold the bleed valve open. When vacuum from an external source is supplied to a negative backpressure EGR valve with the engine not running, the bleed port is closed and the vacuum should open the valve.

A digital EGR valve contains up to three electric solenoids that are operated directly by the PCM. Each solenoid contains a movable plunger with a tapered tip that seats in an orifice. When any solenoid is energized, the plunger is lifted and exhaust gas is allowed to recirculate through the orifice into the intake manifold. The solenoids and orifices are different sizes. The PCM can operate one, two or three solenoids to supply the amount of exhaust recirculation required to provide control of NOx emissions. When testing a digital EGR valve, you can use a scan tool to activate the valve. The rpm should drop for each activation period. An EGR valve that’s plugged or not working will show no change.

According to Standard Motor Products, a manufacturer of emissions components, the EGR passages on the engines that have digital EGR valves are very prone to clogging.

EGR codes may be set that appear to indicate an electrical problem with the valve when in fact the real problem is clogged EGR passages in the intake manifold.

Another style is the linear EGR valve, which is basically a pulse-width modulated solenoid valve where the valve is spring-loaded closed. General Motors was the first to use these linear EGR valves. The computer varies the pulse-width command to the valve to control the amount of opening. A position sensor is integrated into the valve. The sensor generates a signal, very similar to a throttle position sensor, to indicate to the computer exactly how open or closed the EGR valve is. This feedback signal allows the computer to more accurately control the amount of EGR flow. 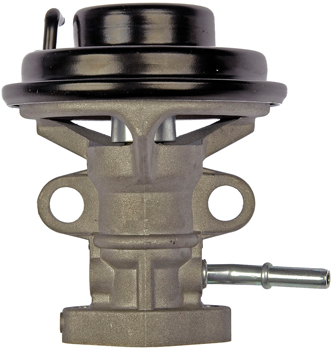 You also will encounter a stepper motor EGR valve, which is designed to work very similarly to GM idle air control motors that have been around for a long time. Here, the valve has two separate sets of coil windings. The PCM sends ­alternate, coordinated pulses to each winding to “step” the motor open or closed in small increments.

According to Standard Motor Products, the following tip is important — If the valve is disconnected electrically while open, then it will remain open and could lead to a technician incorrectly condemning the valve as defective.

When diagnosis of a negative backpressure EGR valve is needed, you must bring the engine up to normal operating temperatures. With the ignition off, disconnect the vacuum hose from the EGR valve and connect a hand-held vacuum pump to the fitting on the valve. Supply 18 inches of vacuum to the EGR valve and vacuum should hold steady for 25 seconds. If the valve does not open or cannot hold the vacuum, it must be replaced. If the valve holds steady, start the engine and the vacuum should drop to zero and the valve should close.

On digital EGR valves, the resistance of the valve can be checked. By connecting an ohmmeter across the terminals on the valve, the windings can be checked for opens, shorts and high-resistance readings. If readings are not within specs, replacement of the EGR valve will be needed. Also, make sure that the EGR passages are not restricted or plugged. You will have to remove the valve to make this visual check. You can also use an exhaust gas analyzer to check an EGR system. Looking at the NOx readings at 2,000 rpm, the readings should be below 1,000 ppm. 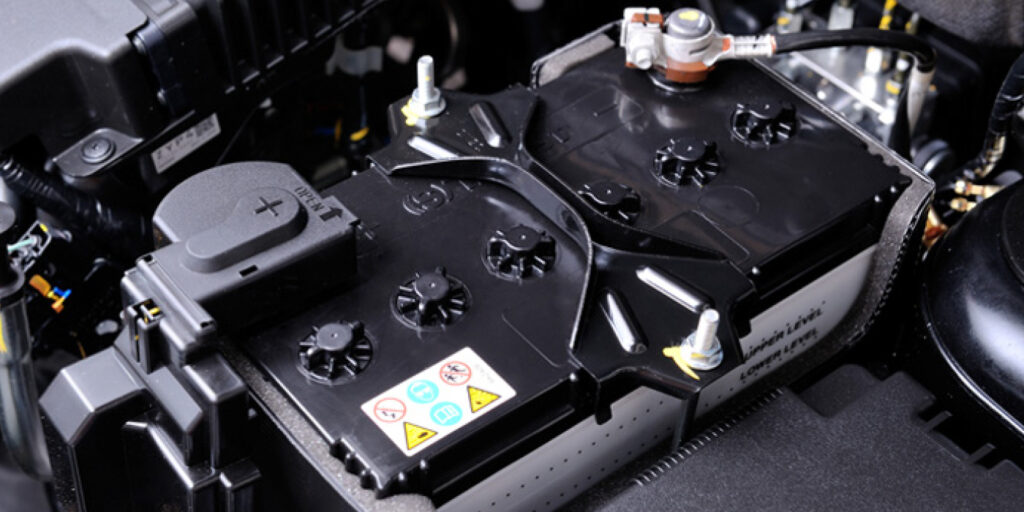