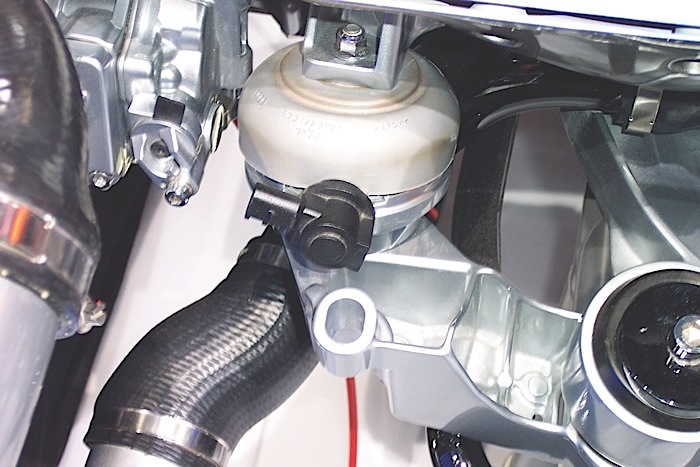 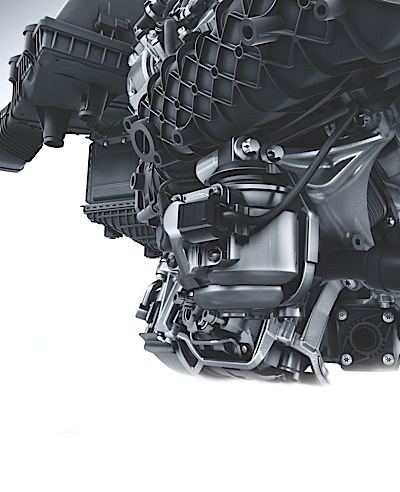 For many years, auto makers relied on solid rubber motor mounts to support the engine. The natural flexibility in rubber allows the mounts to absorb vibration. However, if the rubber is too compliant, the engine may experience excessive motion under load that could stress and crack exhaust pipes and connections. With such tight clearances under the hood, there’s a risk of something rubbing against something else and causing additional noise or problems. So, the rubber in the mounts has to be relatively stiff so the engine does not rock excessively when it is under load.

Engine vibration is usually most noticeable when the engine is idling, especially if the engine has an odd fire configuration as some V6 engines do. Four cylinder engines, as well as diesels, can also produce a lot of vibration at idle. Vibrations can be amplified even more when high-load belt-driven accessories, such as the A/C compressor, are engaged while the engine is idling.

A little more than 30 years ago, auto makers came up with a solution for reducing NVH — the glycol-filled “hydromount.” Replacing solid rubber motor mounts with ones made of hollow rubber filled with fluid allowed the mounts to absorb more vibration without allowing excessive engine motion. This was a totally passive design that did not require any other modifications.

Hydromounts began appearing on various vehicles in the 1980s, and by the 1990s they were common on many domestic and import vehicles. The mounts were more expensive to manufacture (and replace) than solid mounts, and over time they tended to crack and lose their fluid. A hydromount that has lost its fluid is somewhat like a jelly-filled donut that has lost its filling. It goes flat and can no longer provide the same degree of NVH dampening as it once did. The mount has reached the end of the road and needs to be replaced.

Obviously, the only way to restore the same level of NVH control is to replace bad hydromounts that have lost their fluid with new hydromounts. 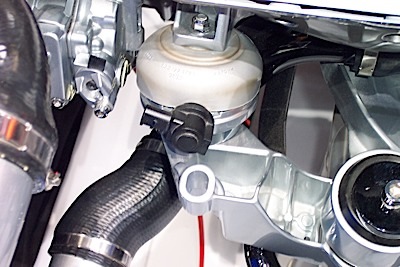 It was inevitable that sooner or later, dumb motor mounts would get smart. A “tunable” motor mount that can change its dampening characteristics has a significant NVH advantage over a passive hydromount or a solid mount. Such a mount can be relatively soft at idle to absorb the unwanted shakes produced by widely or unevenly spaced cylinder firings, then stiffen up at higher engine speeds and loads to limit unwanted engine motions. It’s the best of both worlds, but it does require some type of external controls and inputs. These mounts are found on a number of late-model vehicles, including Honda, Hyundai, Jaguar, Lexus Toyota and others.

On 2005-’08 Toyota Camry V6 models, for example, a vacuum-actuated “Active Control Engine Mount (ACM) system is used to reduce NVH. The front engine mount has a hollow chamber inside that allows the stiffness of the mount to change when vacuum is applied. A duty cycle vacuum switching valve (VSV) on the outside of the mount is controlled by the powertrain control module. When the engine is idling, the PCM completes the ground circuit to the VSV solenoid, allowing intake vacuum to be applied to the mount. This makes the mount more compliant and allows it to absorb more vibration and shake. At higher engine speeds, the PCM reduces the frequency of the pulse signal to the VSV to gradually increase the stiffness of the mount to match engine speed.

On this system, a noticeable increase in NVH can occur if the active mount leaks vacuum, if the hose connections leak vacuum (or are obstructed), or if there is a problem with the VSV control valve, wiring harness or PCM.

The motor mount can be diagnosed with a handheld vacuum pump to see if it holds vacuum or not. If it leaks, it needs to be replaced. You can also use the vacuum pump gauge or your finger to see if vacuum is reaching the VSV control valve when the engine is idling. No vacuum or weak vacuum would tell you there’s a leak in the plumbing somewhere.

You can also check the VSV control valve’s resistance with an ohmmeter. The Toyota spec says it should be 19 to 21 ohms at room temperature across its terminals. If resistance is outside of specs, replace the valve.

If the VSV control valve is functioning normally when tested, and resistance is within specs, but does not seem to be working when everything is connected on the vehicle, the fault is in the wiring harness, engine compartment junction block or PCM. Check the harness for shorts, opens or grounds. The voltage supplied to the VSV control valve should be normal battery voltage.

On a 2008 Lexus ES350, a more sophisticated setup is used to reduce NVH. On this application, “counter-vibration” is created within the active motor mount to help cancel engine vibrations. It’s sort of like noise-cancellation headphone technology, but instead of sound waves that are out of phase to reduce noise, the ACM system reduces the amplitude of engine vibrations via its active motor mount that generates its own counter vibrations.

The Lexus ACM system has its own separate computer (the Active Control Engine Mount ECU). Inputs from an acceleration sensor attached to the front motor monitors the amount of engine shake. The control unit then energizes the actuator inside the active mount to generate a counter shake that reduces the intensity of the vibration. The result is reduced engine vibration and booming that can be felt inside the vehicle when the engine is idling.

The ACM control unit also looks at other data inputs via the Controller Area Network (CAN) communications bus. These include engine load ratio, engine coolant temperature, transmission gear position, vehicle speed and even the outside air temperature. Why it needs all this info to help cancel engine shake is known only to the Lexus engineers who programmed the system, but with all of these inputs it can fine-tune the dampening characteristics of the active motor mount as driving and operating conditions change.

If a malfunction occurs in the Lexus ACM system, the control unit will set a fault code and temporarily deactivate the system. The driver may notice an increase in NVH at idle. The fault code can be read and cleared with any scan tool that can read Lexus powertrain codes, but you’ll need a Toyota Techstream scan tool (or a professional level scan tool with equivalent software capabilities) to run the ACM active motor mount actuator test. If you don’t have such a scan tool, the checks would involve checking the motor mount actuator wiring circuit and connectors for grounds, shorts and opens, and measuring the resistance across the motor mount terminals (it should be 0.55 to 0.95 ohms).

Another spin on the active mount concept was developed recently by Delphi. Well-known for their magneto rheological (MR) shock absorbers on Corvettes, Delphi has applied the same idea to their next generation of active motor mounts. Magneto rheological fluids contain small particles of iron suspended in liquid. When an electric current or magnetic field is applied to the fluid, the iron particles line up and effectively increase the viscosity of the fluid. In a shock absorber, this has the effect of increasing resistance and stiffening the dampening action of the shock for a firmer ride. The same approach also works in a motor mount. The first such application for the new MR mounts was the 2010 Porsche 911 GT3 supercar (doubt you’ll see many of those in your shop!).

The stiffness of the MR motor mounts can be adjusted in real time to match the dampening requirements of the engine as speed and load change. The system requires a microprocessor and data inputs that are already available to the powertrain control module. It also uses a fluid pressure sensor within the active mounts to provide feedback so the controller can compensate for changes as they occur.