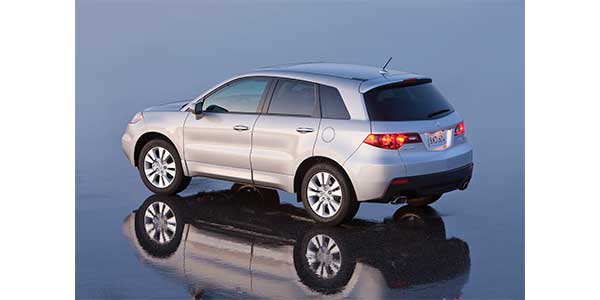 The 2007-2012 Acura RDX was Honda’s first production vehicle in North America with a turbocharger. The company took the proven K-series engine and lowered the compression ratio from 10:1 to 8:1, and added a turbocharger with the associated plumbing. But, it is a lot more complicated when it comes to managing the boost.

Acura/Honda underwent a lot of engineering in managing the boost pressure. The boost is managed with a conventional wastegate and bypass in the intake tract. Acura went a step further by placing a flap that directs exhaust gases over turbine blades for optimal performance. These components work together to manage the boost pressure and how fast the turbocharger is spinning. This prevents dreaded turbo lag or sudden spikes in power.

When diagnosing an RDX with a driveability issue related to the turbocharger, it is critical to check the basics first. After that, it is important to check the operation of the solenoids that control vacuum to the actuators. This can be done with a scan tool and meter. With some RDXs now at 10 years old, it is not uncommon for the diaphragms in the actuator to tear and rip. INPUTS
The system’s main inputs are:

Manifold air pressure (MAP) sensor: The MAP sensor is located in the intake manifold. This sensor measures pressure and vacuum after the throttle body.

Mass airflow (MAF) sensor: The MAF is located after the air filter housing. This dual sensor measures airflow and temperature of the air entering the engine. The information from the MAF is critical in regulating turbocharger performance and air density.

The system also uses inputs like engine speed, throttle position and mass airflow sensor readings to determine the operation of the wastegate, intake bypass and exhaust turbine flap. The sensors work together to correlate information to determine if a change in throttle position or wastegate position produced the predicted results for the pressure reading of the boost pressure or MAP sensor.
The goal of the system is to keep the boost at the correct level and keep the turbine spinning so boost pressure can be added without lag.

CONTROL
There are three electronic solenoids that regulate the vacuum to the actuators for the wastegate, exhaust flap and intake bypass. The solenoids are duty controlled and are either on or off. The actuators do not have position sensors; rather, the action of the solenoids is monitored through the boost pressure and MAF sensors.

For example, if the wastegate or bypass remains open after the electronic solenoid commands it to be closed, the boost sensor will see lower-than-normal boost pressure. Depending on the drive cycle criteria for the code, it might cause a code P2263 (for turbocharger boost performance).

If the wastegate or bypass remains closed, it could cause an over-boost situation that will be detected by the boost sensor. This scenario can cause the system to go into an engine preservation mode that prevents more boost from being generated by controlling the spark, fuel and even throttle position.

WASTEGATE
The wastegate prevents the turbo from exceeding maximum boost pressure. Like all wastegates, it diverts exhaust gases from turning the turbine. The wastegate is powered by a vacuum actuator that is controlled by an electronic solenoid that switches vacuum on or off. The valve applies vacuum to the diaphragm that’s connected to the control rod. One of the most common failures on the RDX is when the diaphragm rips, and it can no longer control the boost.

The wastegate system is duty-controlled by the PCM. It is either open or closed. According to Honda, there are two duty modes or conditions – Condition A and Condition B.

Condition A occurs when the turbocharger boost sensor signal is lower than the upper limit. This condition causes all of the exhaust gases to flow to the turbine and increase its rpm.

In Condition A, the PCM turns on the wastegate control solenoid valve to close it. Also, it opens the passage between the turbocharger inlet connecting tube and the intake. This directs the full boost to the intake manifold.

The descriptions of A and B duty mode conditions also apply to the bypass. Condition A is “on” and Condition B “off.” TURBOCHARGER BOOST CONTROL VALVE
The Turbocharger Boost Control Valve system directs exhaust gases into two passages or scrolls in the exhaust-side turbine housing. An actuator that is duty-controlled by the PCM, depending on the driving condition, moves the flap.

The door restricts the exhaust gas to one scroll at lower RPM, then flips away to allow the gas to flow through both scrolls at higher RPM. This allows the system to tune the exhaust flow over the blades of the turbine for the most efficient operation.

With the variable flap closed, the exhaust gas flows at high speed through the inner scroll of the turbocharger improving the turbo response.

With the variable flap opened, the exhaust gas flows through both the inner and the outer scroll for efficient turbo operation at mid- and high-engine speeds.