Almost every part on the engine determines how long a catalytic converter will last. It could be a faulty line of computer code that pulses an injector too long, or a stuck piston ring that allows oil to be sucked into the combustion chamber. Little details such as these can limit the life of a catalytic converter.

Almost every part on the engine determines how long a catalytic converter will last. It could be a faulty line of computer code that pulses an injector too long, or a stuck piston ring that allows oil to be sucked into the combustion chamber. Little details such as these can limit the life of a catalytic converter.

Platinum, palladium, rhodium and cerium store oxygen in the converter during periods of lean operation or by an external air source. The oxygen is used to oxidize hydrocarbons and toxic gases during periods of “rich” operation. This oxidation changes harmful carbon monoxide (CO) into carbon dioxide (CO2). It will also oxidize hydrocarbon or fuel by turning it into inert carbon products and water (H2O). This is called a “reduction” in chemistry, or the breaking down of molecules into smaller parts. The precious metals act as catalysts in the process and are not changed; they just store and use oxygen to break down combustion products.

However, they can’t break down or oxidize some chemicals in the exhaust stream. If the catalyst is blocked by carbon, silica or phosphorus, the converter will fail to work.

For a catalyst efficiency code to be set, a number of criteria must be met. For example, the oxygen or air/fuel sensor and the rear oxygen sensor must see a reduction in the efficiency of the converter. In other words, if the oxygen levels before and after the converter do not change, the converter is not working. The specific enabling criteria are different for almost every vehicle.

But, this is not an automatic pass or fail. The oxygen sensors need to see this loss in efficiency over a number of drive-cycle conditions. This is why it might take a few hours or even a few days for the light to come back on after an efficiency code is erased and no other service is performed. 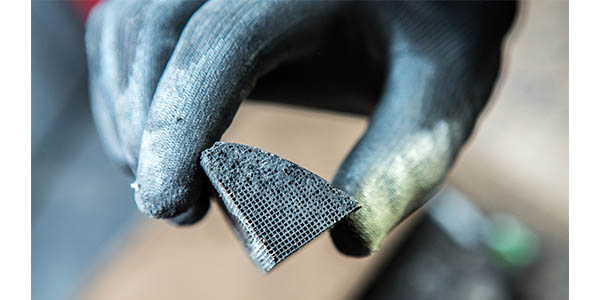 If an engine is running too rich, it cannot store oxygen. If it is running too lean, the reduction process might not occur due to an inability to heat up.

If the engine is dealing with a leaking vacuum hose or a stuck injector, it can’t switch the fuel mixture properly to replenish oxygen and reduce harmful contaminants.

Converter efficiency, along with the switching between rich and lean, can be checked with some scan tools. Lab scopes can also be used to monitor the switching process. The converter efficiency threshold of a vehicle is part of a vehicle’s software. Once the efficiency drops below a specified level and other criteria are met, an efficiency code will be set. The software is designed to filter out data that may be erroneous, or random signals that may interfere with the oxygen sensor.

Most converters start out at about 99 percent efficiency when new, and quickly taper off to about 95 percent efficiency after about 4,000 miles. As long as efficiency doesn’t drop off more than a few percentage points, the converter will do a good job of cleaning up the exhaust. But, if efficiency drops much below 92 percent, it will usually turn on the MIL lamp. With vehicles that meet the tougher LEV (Low Emission Vehicle) requirements, there’s even less room for leeway. A drop in converter efficiency of only 3 percent can cause emissions to exceed federal limits by 150 percent. The LEV standard allows only 0.225 grams per mile of hydrocarbons, which is almost negligible.

Advertisement
In this article:Catalytic Converter