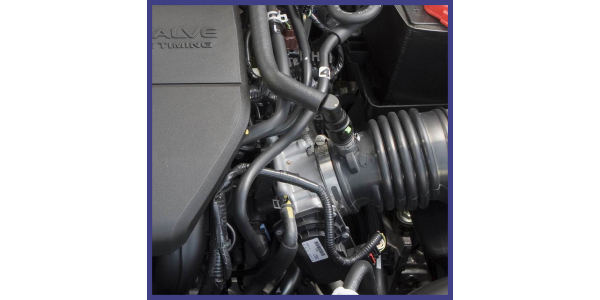 The PCV system prevents crankcase blowby vapors from escaping into the atmosphere by capturing the vapors, separating the oil and directing them into the intake manifold so they can be burned in the engine.

The positive crankcase ventilation (PCV) valve is a little component that can cause big problems if it isn’t working. Neither your customer’s engine nor your job profitability will flourish if you don’t properly diagnose PCV leaks.

The PCV system prevents crankcase blowby vapors from escaping into the atmosphere by capturing the vapors, separating the oil and directing them into the intake manifold so they can be burned in the engine. Even a small, seemingly insignificant leak can illuminate an engine light because it can introduce unmetered air into the engine.

Mounted in the valve cover and connected to the intake manifold, throttle body or air cleaner with a large vacuum hose, the PCV system plays an important role in vehicle performance. Some late-model systems may have a large plastic box attached to the side of the engine or valve cover. Inside the box is a series of baffles that help the oil droplets fall out of the vapors. The oil is then drained into the engine.

If your customer is complaining of any of the following problems, his or her car might have a malfunctioning PCV system. Oil consumption (without smoking), fouled plugs, rough idle, plugged and sticking oil rings, rapid/premature engine wear, ruptured gaskets and seals, oil in the air cleaner and potential detonation are all symptoms of a potentially ineffective or inoperative PCV system.

The system uses manifold vacuum to draw vapors from the crankcase into the intake manifold to be burned with the normal air/fuel mixture. The flow is controlled by the PCV valve in order to meter the amount of vapor introduced into the combustion process.

A neglected or poorly operating PCV system will quickly contaminate the engine oil and heavy sludge accumulations from the combustion process blow-by.

Testing the PCV system is relatively easy and can be done a number of different ways starting by just looking at the components. Does the PCV valve “feel” right? A quick check of the valve can be made by just shaking it and listening for a rattle, the absence of which indicates a blockage. Another option is to pull the valve from the valve cover and feel the end for vacuum while the engine is idling (no vacuum would indicate a blockage).

If you are dealing with an engine that has oil sludging problems or the system shows signs of over pressurization (detached hose or leaking seals), look to see if the PCV valve has an electric heater. Often the heater will fail and condensation will build up in the valve. When the water collects and freezes, the PCV valve will be blocked until the ice melts. Check the coil with an ohm meter to see if it has the correct resistance and is not open.

After running the engine up to operating temperature and allowing it to stabilize at idle, pinch or block off the hose between the vacuum source and the PCV valve. The engine should typically drop 50-80 rpm. If the engine does not change, check the PCV valve and system hoses for blockage. Replace components as necessary and retest.

Shut the engine off and block off the fresh air source to the engine. This would typically be the hose coming from the air cleaner to the rocker cover. Remove the dipstick tube and connect a vacuum-pressure gauge to the dipstick tube. Restart the engine and allow it to stabilize at idle. Then take a reading of your vacuum-pressure gauge. You should read 1-3˝ of vacuum with a normally operating PCV. If you have 0˝ of vacuum or even pressure you have problems.

If the engine has an external air leak you will not have an effective PCV system. This could be a leaking front cover, rocker cover, oil pan gasket, manifold end gaskets or any other host of potential leaks.

Leaks in today’s cars are simply unacceptable. Modern vehicle systems can and will detect even the smallest amount of unmetered air, and you’ll need proper leak detection equipment to find it. In many situations under the hood, you can often find the source of the leak just by looking, but with air leaks – especially those coming in and not going out it can be more difficult to accurately track down.

With no fluid to drip and leave easy signs to follow for diagnosis, the smoke machine can be a valuable asset. With modern machines able to do more than just pump out smoke that can be drawn into a leaking PCV system, today’s equipment with incorporated pressure gauges, flow meters, control valves and connectors to isolate the system being tested will increase your diagnostic ability considerably.

Lighting is important for locating smoke, especially a small trickle of it. Many leak detectors come with a bright halogen or ultraviolet (UV) flashlight, which will reflect visibly off of the smoke vapors.

Although dye is most widely used in systems that have a liquid to carry the dye throughout, such as an A/C system, there are leak detection units for some systems that work with a special smoke solution, which suspends the fluorescent dye and carries it along where it will eventually accumulate around the area of the leak. Most work with a UV light that cause the dye to glow.