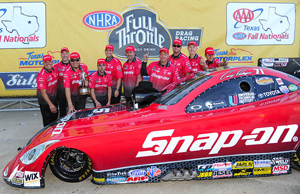 Cruz Pedregon and his Snap-on Funny Car raced to victory with a win at the Texas NHRA Fall Nationals at the Texas Motorplex in Dallas. With the win, Pedregon moved into third in the season point standings, only seven points out of first with four races remaining. It was Pedregon’s 29th career Funny Car victory.

“We congratulate Cruz and the entire Snap-on Funny Car team on their big win in Dallas,” said Tom Kassouf, president, Snap-on Tools Group. “Cruz and his team have worked very hard all year, knowledgably tuning the car to different track and weather conditions, and that effort has really paid off.  As is always the case, many Snap-on franchisees and their customers attended the race and cheered Cruz on to victory.”

Pedregon captured the win in Dallas after qualifying first.  On his way to victory, Pedregon posted an impressive string of runs to secure his first win of the season, completing the final round in 4.200 seconds.

“The car was just so good all weekend,” said Pedregon. “I think this is probably the best race car I’ve ever had, with the exception of one run. We slipped up in the semis against Melanie Troxel. The track was hot, the hottest it’d been all weekend, and we got a little too aggressive with it. But other than that, the car was great, and I think I felt more pressure because we had such a great car. But it was fantastic to win.”

The Snap-on Funny Car will be back in action this weekend at the NHRA Nationals at the Maple Grove Raceway in Reading, Pa. where Pedregon is the defending Funny Car champion.

To learn more about Snap-on tools and its racing program, visit www.snapon.com/racing.