Police in Richmond, VA, told a reporter from WTVR Channel 6 news that more and more drivers are buying counterfeit or stolen inspection stickers instead of paying to have their vehicles fixed.

Below is the article as it appeared in the WTVR Channel 6 website. 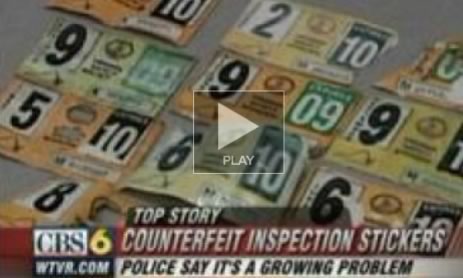 You must get your car inspected every year to ensure it’s safe to drive and most drivers take their car to a mechanic.

Theft used to be the only way to get a valid sticker on a car that wouldn’t pass inspection, but now thieves are turning to a computer and printer and it might surprise you to learn just how bad the problem is becoming.

Officer Thad Johnson with the Colonial Heights Police Department says, "A lot of times we find that older vehicles are having newer inspections on them and they are riding around with multiple violations."

Officer Johnson says he finds on average two counterfeit stickers per week and the courts have taken notice. He says, "Our Judges now are starting to issue about approximately a $150 dollar fine for counterfeit inspections, because it’s becoming a real big problem in our city."

State Inspections are designed to keep the cars and trucks on the road safe and Officer Johnson says, "It’s there to keep them save and their families and passengers inside their vehicles. But it’s also for every other person out on the roadway, because if your brakes are bad and your brakes fail, you’re going to injure yourself and somebody else out on the road."

While counterfeit stickers are a problem, theft of valid stickers continues. One local car company has found a way to prevent it and they say it’s something everyone can do.

John Brandt with the Car Corral says, "With consumers having to pay for inspection stickers and things like that, you can never be too safe and go ahead and score the sticker and that will deter anybody."

If you have your inspection sticker stolen, it will cost you. You will have to go back and pay to get a new inspection.