Repair shops in Attleboro, MA, have not had any drive-by traffic in more than five years due to bridge construction. One shop owner had been forced to use $25,000 out of his own savings to keep his business going. Another business is behind on its rent.

Below is the article as it appeared on The Sun Chronicle website. 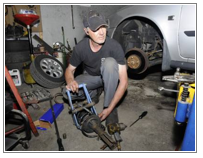 ATTLEBORO – There’s no joy in gasoline alley and there hasn’t been for more than five years – ever since the state closed off the lower end of County Street to rebuild a culvert and a 60-foot railroad bridge.

And there won’t be a celebration there even if the bridge opens as currently scheduled on July 30 – 62 months after the road closed for the project.

Five years without drive-by business has battered a bunch of mom and pop automotive shops, used car sellers and trucking companies clustered in the gritty half-mile stretch of road near the Pawtucket border, nearly driving some out of business and others nearly mad – well, they’re all pretty mad.

The $6.6 million project was originally estimated to take three years. A state Department of Transportation spokesman in 2005 said two years, but both predictions are long gone and either time span would have been bad enough.