In only its second year, the “Last Chance” Classic & Antique Auto, Truck and Bike Show in Waverly, NY, attracted 171 vehicles, up from 90 vehicles last year. Kurt Knapp of Waverly showed off his 1950 Dodge Power Wagon tow truck that had once belonged to an auto repair shop in Waverly.

Below is the article as it appeared on The Daily Review website.

Car show brings back classic cars to the streets of Waverly 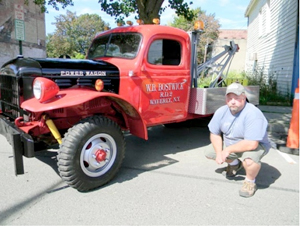 Down the street, 46-year-old Kurt Knapp of Waverly stood next to a tow truck that he is restoring, which had been built 15 years before he was born.

At the same time, many people were looking at a 1956 General Motors Century sedan, which had a signs on its side indicating that it was a sheriff’s patrol car from Cochise County, which is located in Arizona on the Mexican border.

These three vehicles were among the 171 cars, trucks and motorcycles that were part of the "Last Chance" Classic & Antique Auto, Truck and Bike Show, which was held Sunday in Waverly.

The day-long event, sponsored by the Waverly Business Association, also featured a disc jockey, food vendors, door prizes, and a 50-50 raffle. A food collection drive was also underway at the car show for a local food bank.

To read the entire article on The Daily Review website, visit http://bit.ly/p6SdvE.