Harvey Davis has run his family’s auto repair shop, Davis Garage,  at the same location since he purchased the old train depot from the railroad in 1975. Now, the city of Winston-Salem, NC, has filed to seize the depot under eminent domain. The city claims it needs the building to secure federal funding for a high-speed rail project.

Below is the article as it appeared on the FoxNews.com website. 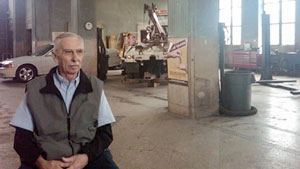 Harvey Davis operates his family auto repair shop out of a grand, 1920s-era structure that was once a bustling train depot in Winston-Salem, N.C. He purchased it from the railroad in 1975 and has been there ever since.

"It’s worked beautiful," Davis said. "The building is very well built. The railroad did everything to the highest standard for longevity."

But the city of Winston-Salem claims it needs the depot to secure federal funding for a high-speed rail project.

City Councilman Derwin Montgomery said there are multiple reasons why the site is needed: "Its proximity to the rail, that rail that is already laid there — its accessibility in terms of where it is for highway access, as well, makes it a prime location to be converted back to its original use."

The city has filed to seize the depot under eminent domain — the ability of a government to take private land for public use. According to Davis, this will be the fifth time he’s given up property to City Hall, either through seizure or negotiation.

To read the entire article on the FoxNews.com website, visit http://www.foxnews.com/us/2011/03/08/depot-owner-steaming-eminent-domain/.