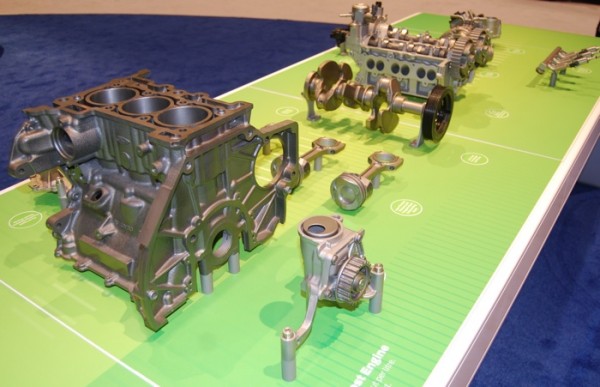 One of many highlights in the Ford booth at the 107th Chicago Auto Show was a large layout of the pieces that make up the first-ever Ford three-cylinder EcoBoost engine. This 1.0 liter turbocharged, direct-injection powerplant delivers 123 hp and 125 lb.-ft. of torque. The 1.0L EcoBoost was named the 2014 International Engine of the Year and Ford is obviously very proud of it. It is available on the Fiesta SE with manual transmission and the Focus.

In the Fiesta, the 1.0L EcoBoost package features a 123-hp rating and  EPA-estimated fuel economy of up to 43 highway mpg. The Fiesta SE also comes equipped with the available SE EcoBoost Fuel Economy Package

The EcoBoost engine line is a “family” of turbocharged, direct injected gasoline engines produced by Ford. FEV Engineering was a partner in their development. EcoBoost technology allows small engines to make the horsepower and torque of larger, naturally-aspirated engines with approximately 20 percent better fuel economy and 15 percent lower greenhouse gas emissions, according to the Blue Oval.

Ford has put its marbles in the EcoBoost bag and sees the technology as an affordable and versatile competitor of hybrids and diesels. The 1.0L came out of the automaker’s Dunton Technical Center in England and went into production about three years ago. The engines are to be produced in Cologne, Germany, Craiova, Romania and Chongqing, China.

The 1.0 was made in two versions: with 99 hp and 123 hp. The more powerful version delivers a maximum of 125 lb.-ft. at 1,400–4,500 rpm and 148 lb.-ft. on overboost. Don’t expect a rocking and shaky little three-banger either. The 1.0L EcoBoost runs smoothly at a 750-rpm idle speed. The engine uses a fast-warming cast iron block. The flywheel is unbalanced to fight the normal three-cylinder engine vibrational characteristics. Ford didn’t have to go through the hassle or expense of adding heavy balance shafts.

Other features include an internal timing belt bathed in the engine oil for durability, more efficiency and less noise. The exhaust manifold is cast into the cylinder head which hastens engine warming and allows for water cooling of the exhaust gases. The dual path cooling system has thermostats for the cylinder head and block so the engine warms even faster. The diminutive, low-inertia turbocharger bolts directly to the head. For extra economy, there’s a clutched alternator that recycles deceleration energy to help charge the battery. A fast-acting stop/start system shuts off the engine when the car is sitting in traffic.

In Chicago the various parts of the engine were laid out on a light green board that looked like a green felt pool table surface. Individual parts were attached to the board and information about each part was presented in white lettering inside a white circle. “High-Energy Spark Plugs and Coil Packs” said the info in one circle next to the coil packs and spark plugs. “Compact Cast-Iron Block” read the letters in a circle next to the tiny engine block. Though it has less holes, the EcoBoost 1.0 costs more to manufacture than Ford’s venerable four-cylinder engine. It’s about $400 more than a Focus with the 1.6L, but its improved emissions can add up to tax savings for some buyers. Eventually, the 1.0L is going to be the base engine for the Focus, Fiesta, and several other models worldwide. The popularity of Ford’s 2.0L and 3.5L EcoBoost mills is expected to help the 1,0L gain complete acceptance here.

While the 1.0L display in Chicago was a small part of the attractions in the Ford booth, it was given prominent placement to catch the attention of visitors to America’s largest new-car venue. And the green “pool table” look subliminally carried the message that this is the “green” engine of the future. 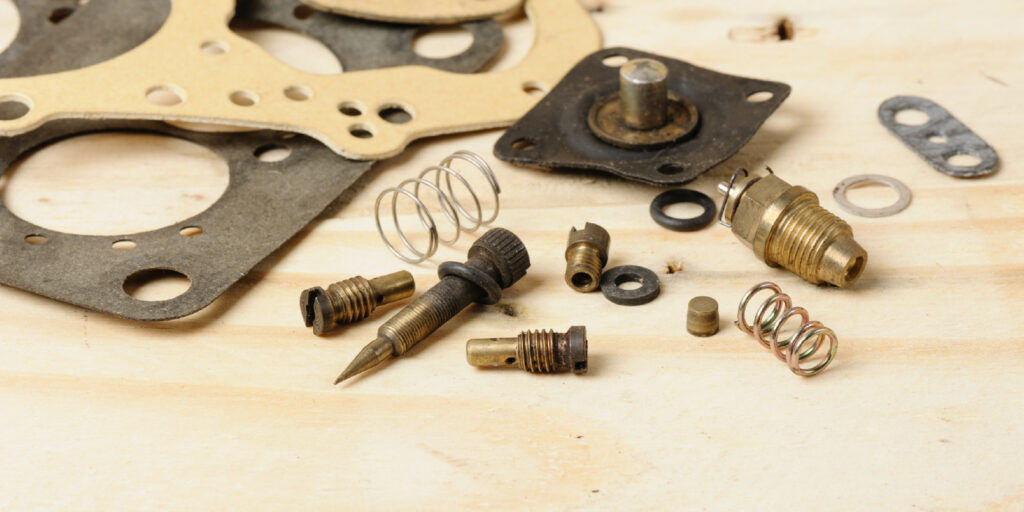 The modern engine measures two things extremely well — the amount of air going into the combustion chamber with the mass airflow (MAF) sensor, and the byproducts that are generated by the combustion event with the oxygen sensor. These measurements allow the engine’s computer to put the right amount of fuel and spark into the cylinder to provide the most efficient and cleanest combustion event.

These concerns may be caused by an improperly seated exhaust system. 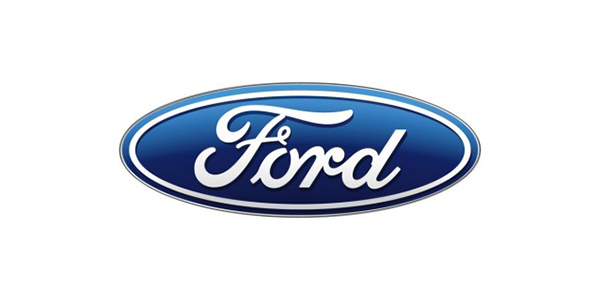