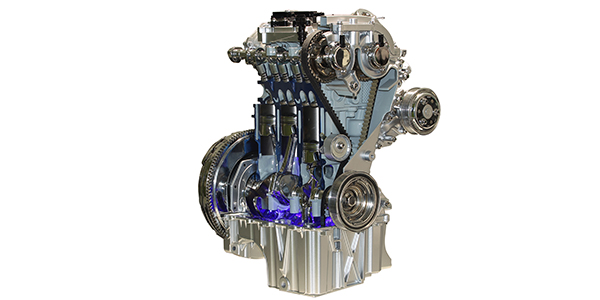 Performance enthusiasts may have some experience with “wet belt” timing systems as an upgrade for the small-block Chevy, but these “new” belt-in-oil systems are OEM designs, used for oil pump drives as well as for camshaft timing drives.

I was therefore a little bit surprised when I heard about the “belt-in-oil” (BIO) timing drives that are being used by well-known manufacturers in the European market, and available from a few equally well-known aftermarket suppliers. I was even more surprised to discover that this odd arrangement is already available here in the United States.

Now, performance enthusiasts may have some experience with “wet belt” timing systems as an upgrade for the small-block Chevy, but these “new” BIO systems are OEM designs, used for oil pump drives as well as for camshaft timing drives. As a performance upgrade, belt drives have a couple of advantages. Since a timing belt is lighter than a chain, and it can absorb and isolate crankshaft harmonics from the valvetrain, a belt is quieter and doesn’t rob additional power from the engine.

“Fuel efficiency,” “reduced emissions,” “noise, vibration, harshness” (NVH) and “compact design” are all popular catch phrases in the auto industry, and these also are the driving forces behind belt-in-oil technology. By designing a light, quiet and compact belt drive, manufacturers hope to increase fuel efficiency while reducing emissions and NVH, and package it all into ever-smaller engine designs. Belt-in-oil manufacturers claim that “wet belts” offer up to a 30% reduction in friction loss as compared to chains or dry belts. This reduces emissions and can increase fuel economy by a little more than 1%.

Due to the improved materials used in the BIO drives, these belts are more temperature-resistant, less prone to stretching than conventional dry belts and have a life expectancy of up to 150,000 miles. The first automotive BIO system was introduced in 2008, hidden inside the European-market 1.8L Ford diesel. Volkswagen soon followed with its EA211 and EA288 engine families of three- and four-cylinder gas and diesel variants. Here in the United States, belt-in-oil applications are a bit more limited, in the form of the 1.0L Ford EcoBoost gasoline engine and (if you like to think outside the box), Honda offers the GC and GCV series of small engines featuring an internal oil-bath timing belt.

As emissions and fuel economy standards become more and more difficult for manufacturers to meet, unique technologies like these will drive the future of the industry. The globalization of our industry also means that technologies introduced in other parts of the world may soon come to our shores, too. Lightweight, compact components with extended service intervals are becoming the “new normal.” But don’t worry that these claims of “lifetime” or “high-mileage” wet belts mean that the aftermarket will lose out on future parts sales. The European aftermarket already offers BIO timing kits, and, from what I’ve seen so far, they’re becoming a rather popular category already.

The quality of oil in the crankcase determines the life of a BIO belt. If oil changes are neglected, the degraded oil will not be able to protect the belt. Oils contain buffers and anti-oxidation additives that prevent the aging process. If the belt’s elastomers and fibers start to breakdown due to poor quality oil, the teeth of the belt can separate from the backing cords.

If the driver ignores the oil life monitor, the timing belt will eventually fail. It may cause the engine to jump time a few teeth. And, eventually, the belt will shred itself. The bad oil can also damage the tensioner which increases the possibility of the engine skipping time or a catastrophic failure.

The other issue with BIO belts is if the belt is damaged, the shrapnel goes in the crankcase. The oil filter will trap the smaller pieces, but large chunks can clog the oil pickup in the pan. This could cause low oil pressure and starvation at higher engine speeds.

Ford has issued oil specification WSS-M2C948-B for the 5W20 oil used in the 1.0 L EcoBoost engine based on the European ACEA C2 oil sequence. According to Ford, the specification contains in-house tests for fuel economy and piston deposit control.