Bearing Down on Engine Damage – UnderhoodService

material does a much better job of keeping a steel crankshaft moving than a steel or cast iron bearing does.

Although the material itself may give the engine bearing some friction-reducing properties, its performance is enhanced by a lubricant between the moving and stationary surfaces. Another of the bearing’s duties is to establish and maintain a film of oil.

For all these requirements, the bearings usually do a very good job at keeping the moving parts moving. However, when a bearing fails, the results can be spectacular — and catastrophic. 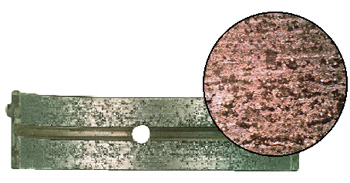 But even when they fail, the fault usually doesn’t lie directly with the bearing itself. There is usually another, less obvious culprit behind the crime, which may force technicians to employ some C.S.I.-like investigatory tactics.

There can be literally dozens of reasons for premature wear or failure of an engine bearing. Luckily, the criminal always leaves a trail.

By carefully inspecting the evidence left behind, an engine specialist or technician can discover and eliminate the cause of bearing failure.

Dirt or Debris
Whether it’s dirt, dust, grinding remnants or any other particle, debris can cause significant damage to a bearing surface.
If it’s in the lubrication system, dirt will usually leave circumferential scratches and often the offending piece will remain lodged in the bearing’s surface. 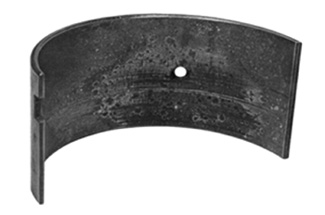 Always be sure the lubrication system is flushed thoroughly before reassembling an engine.

Another way dirt can play havoc is if the engine components aren’t completely clean. A foreign particle trapped between the bearing back and the housing will cause a raised area in the bearing.

This little hump can lead to contact between the bearing and the crank journal. You should always ensure the bearings are installed in clean surfaces.

Insufficient Lubrication
A complete lack of lubrication in the crankcase usually leads to seizure of the bearing and total failure of the engine. But, experts say a more frequent issue regarding lubrication is simply inadequate oiling. The absence of a proper oil film will result in metal-to-metal contact, occasionally to just one bearing or often to a number of them. 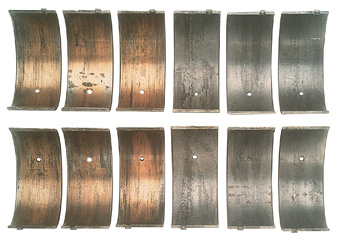 When the bearing is damaged by oil starvation, you’ll find a very shiny surface and evidence of wiping.

Remember, the failure of the oil film can be seen in a variety of ways on the bearings. Check on such things as blocked oil passages, a malfunctioning oil pump, improper bearing selection or installation, oil seal failures, fuel dilution (often caused by blowby of fuel and air past the piston rings) or foaming or aeration, caused, ironically, by an overfilled crankshaft.

Passing Inspection: Technicians should also carefully inspect connecting rods to make sure they are not twisted, as this can cause uneven bearing loading and wear.

Misassembly
Sometimes, failures are the result of simple installation errors. For example, if a bearing half without an oil hole is improperly put into a position where the hole is needed, that journal will receive no lubrication. 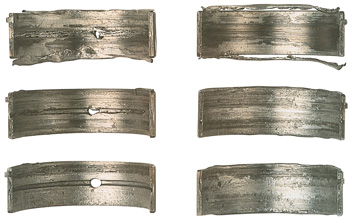 Other types of assembly errors may also be seen. If a connecting rod or main bearing cap is installed in the wrong position, or a bearing isn’t set into place securely, lubrication will be insufficient and cause failure.

Careful installation procedures are, of course, critical in every aspect of engine building — careless errors are always expensive.

By increasing the surface contact between the bearing and connecting rod housing bore, crush minimizes bearing movement, helps to compensate for bore distortion and aids in heat transfer. 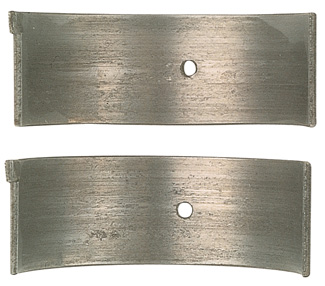 In simple terms, bearing crush is what holds the bearing in place. Think of it as putting 10 pounds of something into a five-pound bag. The tang or locator tab on the shell that fits the saddle is only for locating the bearing during assembly.

When crush is correct, slightly elliptical bearing shells conform to a perfect circle when they’re torqued into place. In this way, the crankshaft rotates properly.

However, when there is excessive crush, the additional compressive force causes the bearing to bulge inward at the parting lines causing side pinch.

Excessive crush may be the result of an attempt to reduce oil consumption by filing down the bearing cap, assembling the bearing caps too tightly by over-torquing the fasteners or, in some cases, using too few shims.

Insufficient crush, on the other hand, will result in bearings that are not held securely in the bore, and remain free to move back and forth within the housing.

Because contact between the bearing back and housing bore is necessary for cooling, this condition means heat transfer away from the bearing is impeded, resulting in overheating and deterioration of the bearing surface.

Insufficient crush may be caused by the improper attempt to achieve a better fit by filing the parting faces, by dirt or burrs holding the bearing caps open, improperly torquing the fasteners during installation, improperly sizing the housing bore or (if needed) using too many shims in the assembly process. 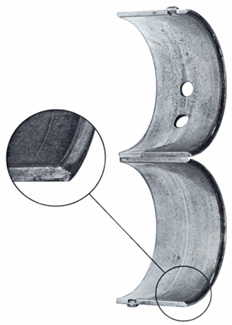 Other Clues To Bearing Failure
Shiny areas will be seen on the back of the bearing due to its rubbing back and forth. In some cases, discoloration may be seen where oil has worked its way between the two surfaces and burned.

Overloading may be caused by vehicle operator error. Excessive idling can result in an oil film that can’t support the load needed.

Hot rodding, or forcing excessive loads, can similarly affect the bearings. Engine tuning and operating conditions should always be followed and appropriate bearing materials chosen for the application.

A vehicle that leaks oil, causing oil starvation, has its share of issues, as we have seen, of course. But, some vehicle owners who have cars or trucks that do not leak oil are in an even more potentially serious situation. At least the leaker lets you know it needs oil added now and then, with fresh oil maintaining its levels.

The engine that seems to be leak-free can be overlooked, yet after a certain amount of time, the oil begins to degrade. The acids in the oil then attack the bearing surface.

Proper selection of bearings will go a long way toward a successful engine build. And checking assembled bearing clearances to make sure the bearings are not too tight or too loose should always be done as a final check to make sure oil clearances are within the desired range for the engine.

Attention to the machining and material selection processes at the front end should help reduce the chance of bearing failure down the road. But armed with these forensic tools, should those mysterious bearing failures occur, you should easily be able to solve the crime.

Note: Special thanks to Federal-Mogul, MAHLE Clevite, King Engine Bearings and ACL Bearings for their contributions to the background of this article.