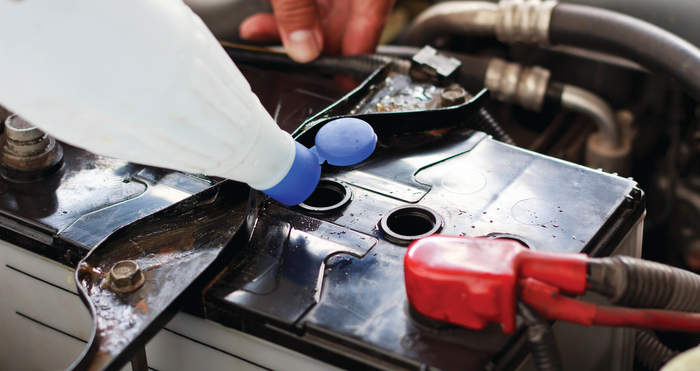 A good battery with an adequate charge is absolutely essential for reliable cold starting. A weak battery, or one that is rundown, may not deliver enough amps to crank the engine when temperatures plunge and the oil thickens. Cold weather can be hard on batteries, but so can hot weather because it increases water loss from the electrolyte inside the battery. That’s why batteries in hot climates usually don’t last as many years as those in more moderate or colder climates.

The battery must also be capable of providing backup power for the vehicle’s electrical accessories and electronic modules. When the engine is running, the charging system can usually produce enough current to meet all of the vehicle’s electrical needs, but when the engine is idling and the lights, heater, defroster, radio or other accessories are placing high loads on the system, additional power may be drawn from the battery if the alternator can’t produce enough juice. And when the key is off, the battery has to provide a steady supply of voltage to any onboard modules or other accessories that need power.

When a battery is disconnected or goes completely dead, the loss of voltage can cause a variety of problems. Radio presets and seat/mirror settings are lost, and the adaptive and learned memories in the PCM and other modules disappear as well. The PCM can forget fault codes and other diagnostic information (long-term fuel trim adjustments, the readiness status of OBDII system monitors, electronic transmission shift adjustments, etc.). Some climate control systems (1996 and up Dodge minivans, Cadillac Escalade, Chevy Avalanche and Suburban) can forget the position of flow control doors and actuators. On late-model vehicles with controller area network (CAN) electrical systems, some modules may go into a default mode, standby mode or sleep mode, and may require pinging or reprogramming with a scan tool to restore normal function. We’ve even heard of 4×4 modules on some GM SUVs never waking up when the battery is disconnected (which requires installing a new module to fix the fault).

For these reasons, never disconnect a battery on a late-model car without first attaching a backup power source to the vehicle’s electrical system. This could be another battery, a battery charger or a “memory saver” that plugs into a power outlet. Make sure the outlet remains “hot” when the key is off, otherwise it won’t feed voltage from the auxiliary battery back into the system.

Load testing a battery with an adjustable carbon pile battery tester is one way to check the condition of the plates inside a battery. A load tester applies a calibrated load and displays how the battery responds. The load, which is set to half the battery’s cold cranking amp (CCA) rating, is applied for 15 seconds. As long as battery voltage remains above 9.6 volts, the battery is considered “good.” But if it drops below 9.6 volts by the end of the test, the battery may be “bad,” or the battery may have to be recharged and retested if it was not fully charged prior to the test. That’s one of the drawbacks of a traditional load test — for accurate results, the battery must be at or above 12.45 volts (75% charged) before it is load tested — otherwise it may fail the test. 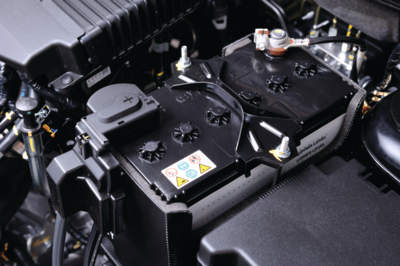 Another way to test a battery is to measure its “conductance.” A low frequency alternating current (AC) signal sent through a battery can reveal how much plate area is available to hold and deliver power. As a battery ages, its conductance declines. Shorts, opens and other cell defects also affect conductance, so measuring conductance gives an accurate indication of battery condition.

Some battery testers use a slight variation of this technique and send a high frequency signal through the battery to measure its internal resistance.

One of the main advantages of conductance testing is that it can test batteries that are low or almost completely discharged. Conductance testing can be done with the battery in the vehicle and without disconnecting the terminals (though the terminals must be clean and tight). If the posts or side terminals on a battery need to be cleaned (which is recommended), remember to use a battery backup to maintain voltage to the onboard electronics.

A conductance test can also be repeated multiple times on the same battery without draining the battery, unlike a traditional load test which pulls out a lot of amps. That also saves time because there’s no need to recharge the battery before or after testing.

Some conductance testers also analyze the battery’s CCA capacity, which can be used to estimate the battery’s remaining service life. Some also allow you to measure the amps drawn by the starter while cranking the engine and analyze the charging system’s output under load once the engine is running.

If the tester reads CCA, you can also use it to diagnose bad ground connections by running a CCA test at the battery terminals, then repeating the same test using a ground point on the engine or elsewhere. A difference of more than 25% in the CCA readings between tests indicates a bad ground.

If a vehicle has a battery that keeps running down, but the battery and charging system both test OK, the problem may be a key-off current drain that’s sapping the battery of its reserve power.

Keep in mind that opening a door, the trunk or turning anything on can wake up various modules and start the timer countdown all over again. So, if you want to check the parasitic draw on the battery, leave the hood open (or the trunk if the battery is located in the back).

A key-off current reading above specifications means it’s time to start pulling fuses and relays to isolate the fault. Refer to the vehicle owner’s manual or a wiring diagram to identify the fuses and relays. Then pull the fuses and relays one at a time until the current reading drops. Avoid pulling the fuses for the PCM or other KAM-sensitive modules until you have checked all of the other circuits. Once you’ve found the circuit that is causing the excessive current drain, check the relay, switch, module or other components in the circuit and replace as needed.

• Do not turn the charger on until both leads have been connected to the battery. Connect positive to positive and negative to negative. Do not reverse the connections as doing so may damage the charger and battery.

• Slow-charging at 6 amps or less is best because it develops less heat inside the battery (which can damage cells and increase evaporation). A slow charging rate will also break up the sulfation on the battery plates more efficiently to bring the battery back up to full charge.

• “Smart chargers” also work well because they automatically adjust the charge rate to the battery’s state of charge. Most start out with a charging rate of 15 amps or higher, then taper off the charging rate as the battery charge comes up.

• Fast-charging a battery saves time but risks overheating and damaging the battery. If using a fast-charger, don’t use the highest setting. Use the “boost” setting only when cranking the engine.

• Refer to the battery’s reserve capacity (RC) rating to determine charging times and rates. The charging rate (in amps) multiplied by the number of charging time hours should equal the RC of the battery. (Example: a dead battery with an RC rating of 72 will require charging at 6 amps for 12 hours.)

How Battery Service Continues To Change
Connect with us