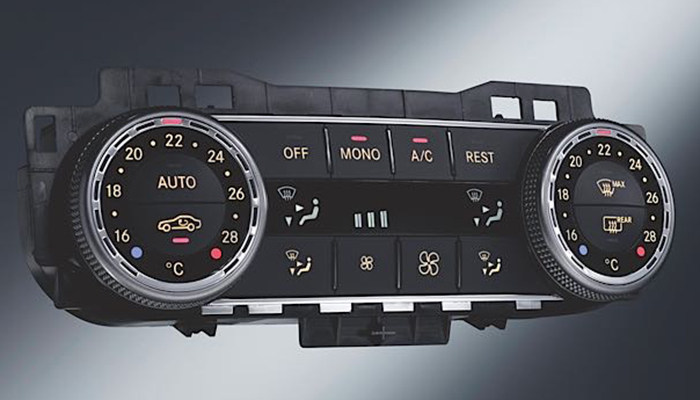 When a driver sets a temperature in the control head of an HVAC system, what does it mean to the vehicle? New HVAC systems look at more than just blower motor speed, door position and the high-pressure switch voltage. These modern systems are looking at temperatures inside and outside the vehicle. They are also looking at the overall efficiency of the vehicle.

When a driver sets a temperature in the control head of an HVAC system, what does it mean to the vehicle? New HVAC systems look at more than just blower motor speed, door position and the high-pressure switch voltage. These modern systems are looking at temperatures inside and outside the vehicle. They are also looking at the overall efficiency of the vehicle.

For example, when a driver selects an interior temperature of 72º degrees, this could trigger many different settings depending on the outside temperature, humidity and even the position of the sun.

Some vehicles also use passive infrared sensors mounted in the dash or in an overhead console to monitor the body temperature of the vehicle’s occupants. This allows the system to fine-tune heating and cooling output so everybody stays comfortable.

Interior air temperature sensors are usually simple, two-wire thermistors that change resistance with temperature, but some are infrared sensors that detect heat from the vehicle’s occupants. This thermistor-type usually has an aspirator tube that pulls air through the sensor when the blower fan is running. Others use a small electric fan for the same purpose. A plugged aspirator tube or inoperative fan will slow the sensor’s response to temperature changes. 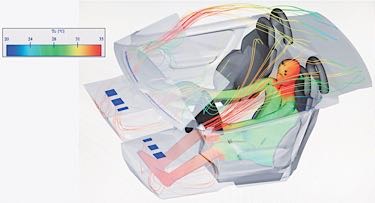 Many ATC systems make use of a photo diode sunload sensor on the dash. This sensor allows the ATC system to increase cooling needs when the cabin is being heated by direct sunlight. On vehicles with dual-zone systems, there is often a separate solar load sensor for each side. Solar load sensors receive reference voltage from the ATC module and pass current when the light intensity reaches a certain threshold.

The latest sensor to be incorporated into ATC systems is a humidity sensor. Cadillac, Audi, Acura, Volkswagen and many automakers use humidity sensors.

Humidity sensors are capacitance sensors that measure the amount of moisture in the air. The information from the sensor both regulates the volume of air projected onto the windows to reduce misting and manages the humidity levels inside the car to enhance climate comfort. These sensors are typically mounted at the base of the rearview mirror.

Air quality sensors can prevent harmful gases and unpleasant odors that can get into the cabin when the vehicle is sitting in heavy traffic, passing through congested areas or driving through tunnels. The sensor signals the fresh air inlet door/ventilation flap to close when undesirable substances are detected. Cadillac, Audi and other luxury car manufacturers are using this sensor. This sensor is typically mounted behind the grill.

Carbon dioxide emitted just by the vehicle occupants can build up to toxic levels inside a modern, sealed vehicle with the HVAC system in the recirculation position. These high levels of carbon dioxide can cause drowsiness.

In the past, this was not a problem because most vehicles leaked outside air into the vehicle. Today’s late-model vehicles deal with this issue by opening the recirc door at set intervals to keep the levels of carbon dioxide down. Some drivers have noticed the opening of the door and think it is the A/C system failing. This usually happens on long trips with high exterior temperatures.

By monitoring carbon dioxide levels, gradual introductions of outside air can be mixed with the recirculated air to minimize the change in outlet temperatures.

Advertisement
In this article:Climate Control