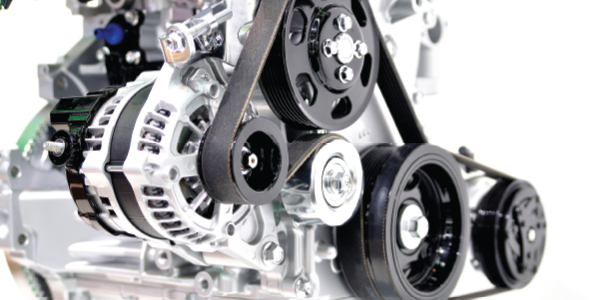 As many start-stop vehicles are aging out of warranty, you are likely to be encountering them in your service bays. Whether they are a true hybrid vehicle or have a conventional powertrain, attention to the underhood condition of the belts can be a profit center for you as well as a safety check for your customers.Advertisement

A slipping serpentine belt can cause all manner of headaches to a driver. Today’s cars have been carefully engineered to minimize slippage but, realistically, eliminating it is almost impossible.

For vehicles using start-stop technology, the headaches can be just as painful – and belts that aren’t properly tensioned could potentially prevent the engine from restarting effectively, minimizing the fuel savings benefits of a mild hybrid system.

The belt alternator starter found in some vehicles utilizing start-stop technology generally consists of several different components, including a battery pack, an electric motor/generator that converts AC to DC power as well as software and electronics that manage and send power from the generator to the vehicle’s conventional battery. In addition, a separate engine accessory drive uses separate tensioners and a drive belt that transfers torque to the gasoline engine from the electric motor to facilitate starting and enhance acceleration – it also transfers torque back from the gasoline engine to the electric motor to generate electricity.

It has proved to be an impressive system for some applications, because it is no more cumbersome than a traditional starter, and is helpful for use in all gears, not just for starting in first gear. It has been implemented in several domestic cars (GM has been bullish on the technology with the first application in 2007) as well as some imports, including recent Audi A7 and A8 sedans.

As with conventional engine technology however, attention to belt tension remains important. Too much tension can increase the loads on the engine and the strain on a belt is not constant. With stop-start technology, those changing loads may be magnified at every red light. It is a balancing act between drag, slippage and belt wear.

The slippage of a serpentine belt is typically managed by how much of the belt makes contact with a pulley. How much force is required to turn a component will determine the amount of belt contact; for example, an A/C compressor pulley might have more belt contact, while a power steering pulley will have less.

General wear and tear can happen over time, which can lead to your engine running sluggish and overheating, which can also result in poor gas mileage. Climate plays a part too – extremes at both ends of the thermometer can stress serpentine belts, and the sudden movements may be detrimental. Always check your customers’ belt conditions as a matter of course.

Inspection Is The First Step

If you see a lot of movement or flutter in the belt as the engine is running, the tensioner may be failing – if it’s weak or sticking it should be replaced,  It could also be that the original belt had been replaced previously with one that isn’t quite the correct length for the application.

An automatic tensioner has a coil spring inside that applies just the right amount of force against the belt to keep it tight. The tensioner also provides a little “give” so it can absorb and cushion shock loads on the belt that occur when the A/C compressor clutch cycles on and off. The tensioner automatically compensates for wear and keeps the belt under constant tension but sometimes the bearings in a tensioner can fail and the pulley can disintegrate.

Some vehicles are using new crankshaft pulleys to dampen and decouple vibration coming from the engine or drive belt system. Like a dual mass flywheel, the crankshaft pulley has two masses that are acted on by two springs. In addition to the springs and masses, there are friction based dampening elements that help to control the movement of the dampener. These elements can wear over time. The pulley can prevent the sudden slippage that can occur during starting and acceleration.

Belt tension is critical. Too little tension may allow the belt to slip and squeal. Slippage also causes the belt to run hot and age prematurely. And if the belt is loose, it may come off its pulleys. Too much tension on a belt may overload it in addition to the shaft bearings on the water pump, alternator, power steering pump and air conditioning compressor, possibly leading to premature failures in these components.

Vehicles with stop/start system will be soon or already are coming into your bays – and they’re only going to become more common. These systems can improve fuel economy by 3-5% depending on the driving habits of the customer. In addition to the belts that power the engine components, you’ll be faced with larger or multiple batteries, different oil requirements, more advanced electrical systems and a brake pedal that does more than stop the car – it’s a switch that will start it as well.