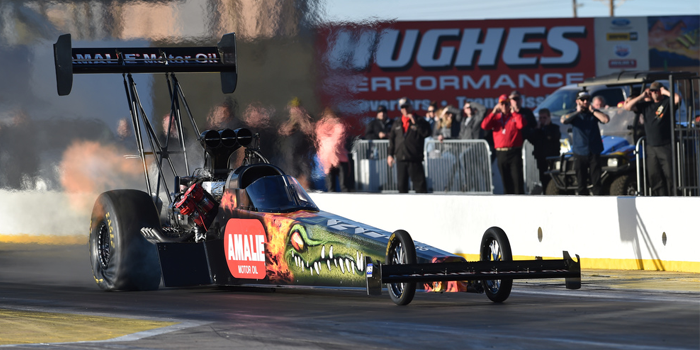 AMALIE Motor Oil has announced the launch of the AMALIE Motor Oil XTERMIGATOR Top Fuel Dragster, to be driven by the veteran NHRA Top Fuel driver Terry McMillen. The AMALIE-sponsored, Indiana-based Terry McMillen Racing team debuted the new dragster at the 56th Circle K NHRA Winternationals on Feb. 11 in Pomona, California. The XTERMIGATOR will continue to sport AMALIE’s fan-favorite alligator theme similar to the AMALIE Motor Oil Top Fuel Dragster that McMillen has campaigned for the past dozen years, but with a whole new attitude, the company says.

“If you think about it, an instigator is someone who wants to start something with the competition, while an exterminator wants to eliminate it,” said McMillen. “That’s what we’re about: engaging with and ultimately exterminating the competition.”

The dragster features a new DSR chassis, an alligator-themed decorative wrap, a 300-inch wheel base and an XTERMIGATOR logo. As a themed car, the XTERMIGATOR beckons back to the early days of drag racing, when “Mongoose” and “Snake” were on the tracks, AMALIE says.

Top Fuel dragsters are the fastest accelerating vehicles in the world, featuring more than 10,000 horsepower that moves the car from zero to 300 miles per hour in less than four seconds. AMALIE Motor Oil has sponsored Terry McMillen Racing since 2004 and has a contract spanning through the 2019 NHRA racing schedule; the sponsorship is thought to be the longest current and ongoing sponsorship in motorsports.

“AMALIE has been actively involved in NHRA racing for over 60 years, and we have evolved with the sport,” said Harry Barkett, president of AMALIE. “The XTERMIGATOR pays homage to the dragsters that came before it while looking ahead to the growth that we see for drag racing. We also believe that our involvement in the sport helps us build better and stronger products.”