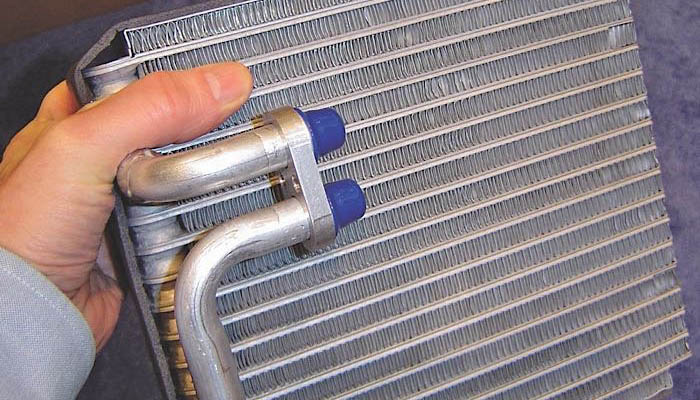 If you know someone who tells you that his or her vehicle’s air conditioner blows out air that smells like the inside of an old gym sneaker when the A/C is turned on, they are not alone.

If you know someone who tells you that his or her vehicle’s air conditioner blows out air that smells like the inside of an old gym sneaker when the A/C is turned on, they are not alone. Literally.

The cause is microbes that are getting a free ride while growing on the A/C evaporator.
Molds like damp, dark places, and various bacteria can also thrive under these conditions. But besides smelling bad, these organisms can be unhealthy to breathe.

Air conditioner odor complaints seem to keep coming back no matter what treatment vehicle owners try, right? The reason is that most odor treatments are short-term, while the source of A/C odor is a combination of factors, including airborne microorganisms, that naturally repeat over time. Many products that are offered to control odor, such as disinfectants, may have a relatively effective initial application. Unfortunately, even the strongest disinfectant leaves no long-term, residual protection against the inevitable repeat odor infestation.

Air conditioning odors typically result from uncontrolled growth of bacteria and other microorganisms in the evaporator. Research by independent laboratories has found fungi such as Aspergillus, Cladesporium, Penicillium and others growing on cooling coils and other A/C system areas.

A musty odor may be emitted from the air conditioning system of some vehicles that are usually operated in areas with high temperature and humidity. It’s most noticeable when the air conditioner is first turned on after the vehicle has been parked for several hours.

1. Blockage of the evaporator housing drain pipe, resulting in a buildup of condensation.

To address excessive air conditioning evaporator odor, check the evaporator housing drain pipe for blockage. If no problems are found, the evaporator and housing should be cleaned and disinfected.

If you must replace an evaporator, you may want to look into finding one that has a special chemical coating that inhibits the growth of mold and bacteria.

Advertisement
In this article:Climate Control

Odors In The A/C: How To Troubleshoot Smells