A Day at the Dentist: There Are Some Things That Customers Can Not Fix Themselves – UnderhoodService

Some time ago, I had a root canal procedure at my buddy’s dental office. If you’ve never had one, you’re missing a whole lot of fun (I’m kidding; it isn’t fun at all.) It’s not cheap, that’s for sure. But like a lot of my customers will tell me, “Well, it needed to be done.”

I thought I was through with dental problems for a while. But, a few months later I had another toothache in the same tooth. The crown the dentist put on was so tight he couldn’t get it off. So, ­instead, he drilled through the cap and down into the nerve that was giving me a problem. Thankfully, I was completely numb and couldn’t feel a thing, except when he actually hit the nerve… zowee!!!  Yep, that’s the spot alright.

My dentist is an old friend of mine, and we’re ­always kidding around with each other. I fix his family’s cars, and he takes care of my family’s teeth. He even comes up to my place to do a little fishing now and then. After the last needle was gouged into my gums and all the sharp instruments were safely put away, I thought I’d have a little fun with my buddy. I told him I really wanted to pull this little gag when I first walked into the waiting room. 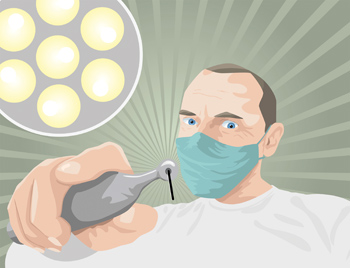 It went something like this: I walk into the waiting room and start getting louder and louder. I demand my money back for such a botched repair job. I tell everyone within earshot that I’m going to sue and call the Better Business Bureau. I start stomping my feet and tell him how lousy a dentist he is, and that I’m never, ever coming back again, because “it’s doing the same thing.”

I told him this is how some people will act when they come to a repair shop over similar situations. He didn’t seem to like my little joke. I guess it didn’t sound as funny as I thought it did, but he did have a great comeback for me though.
“There are several hidden avenues of problems that can’t be foreseen. Until you cross the original problem off the list of possibilities, you’ll just never know. Even when using the best diagnostics available, things can still go wrong, but we always hope for the best results no matter what the situation.” Wow, I should write this down.

­­IF ONLY CARS COULD SPEAK
My dentist friend will ask a patient, “Does this hurt?” and he’ll get an answer. Cars, on the other hand, can’t really answer that question. The big difference is that my patient is a car. It does talk to me, in a way, but just not in the same manner as a patient at the dentist office does. I’ve got to figure out a way to make the car talk to me. Then, I have to inform the customer of the cost of the repair and hope there isn’t too much pain involved. (I could use a little Novocain for the customer right about now.)

When the dentist says: “This is going to cost you a thousand dollars,” and you’re sitting there, holding your hand against the side of your cheek, I guarantee, you’ll nod your head “yes.” It’s just not that easy when it comes to car repair.

Making a scene at the dentist’s office doesn’t seem like the smart thing to do, or, for that matter, having an all-out tantrum at the repair shop isn’t going to solve a thing either. It’s a shame, though, that some people feel the need to come “un-glued” over a car repair. It’s a car…we can fix it. Honestly, a majority of the time, I find that the complaints from my customers about their cars are similar to my toothache problem. Related, yes, but not as a result of the previous repairs in the way they feel it is. 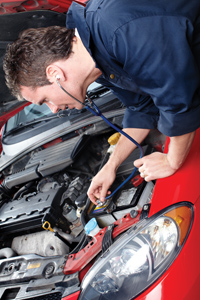 TECHS ARE ‘MOTOR DOCTORS
As a technician, I have to assume the role of a doctor, diagnose a problem quickly and accurately, and do the best I can to avoid the “same thing” syndrome. But, if the problem does recur, just like it did with my root canal, I focus on how to repair it and not make a scene. Hey, things happen, but who knows why? I know, I don’t. Maybe using my dentist’s words of wisdom could help the next time something like this happens again.

I did learn something new about dealing with bad situations from my buddy, that’s for sure. I got a little more than a root canal that day. I’m glad my dentist friend and I had our little talk. He’s a great guy, a great dentist and a good friend, too.

So, the next time I have a toothache, I’ll make an appointment. I know it’s going to cost me money, I know it’s going to be painful, but I also know I can’t take care of it myself. Our customers should have that same mentality.
I’m sure when I finally get to the dentist office and I’m sitting in that chair, he’s going to pull out one of his sharp, pointed ­instruments and start probing around and ask, “Does this hurt?” I know exactly what I’m going to do. I’m going to nod my head, open wide and pay the bill.