John Nikas of Irvine, CA, is setting out on a journey in a 1953 Austin-Healey that will take him 50,000 miles through 50 states as part of the Drive Away Cancer project. Last year, he made a 5,800-mile coast-to-coast drive in the car.

Below is the article as it appeared on the NBCLA.com website.

"Drive Away Cancer" Austin-Healey on 50,000-Mile Lap of United States 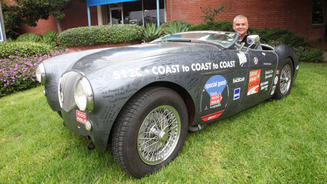 There are about 6,500 names written in black Sharpie marker on John Nikas’ 1953 Austin-Healey 100 — a vintage British sports car that, despite protest from every dashboard warning light and two fires, soldiered through a 5,800-mile coast-to-coast-to-coast drive last year that started as a way to inspire a friend diagnosed with cancer.

Some of the names are those of people battling the disease. They found inspiration in a rickety odds-defying car that somehow sputtered from Orange County to South Carolina and back west to Monterey.

Fifty-six of the names are people who have died since Nikas and the car, aka "Grace," began their two-week journey last summer. For their families, the car became a rolling memorial.

"Last year, we thought we were going on a drive to raise cancer awareness," said Nikas, who races vintage cars. "We didn’t understand at the time the Grace would become an instrument of healing. It’s amazing to hear from people who are sick who think if this car can stay on the road, so can they. It’s a good metaphor."

Nikas, of Irvine, and "Grace" will set out on another journey Tuesday from Autobooks-Aerobooks in Burbank — 50,000 miles through 50 states as part of the Drive Away Cancer project. The trip includes scheduled stops at hospitals, car shows and meetings with people who heard about the little Austin-Healey that could.